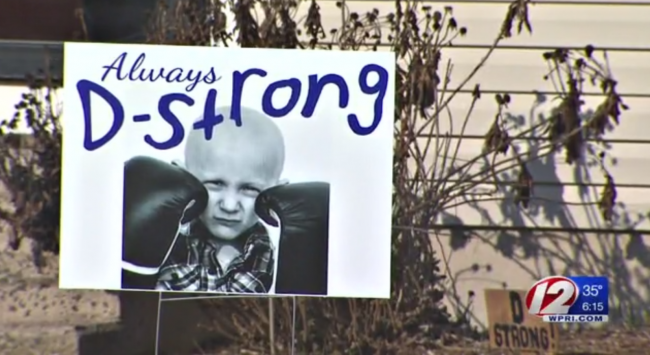 WESTERLY, R.I. (WPRI) – New England Patriot Rob Gronkowski is known for his toughness, but he’s got nothing on 8-year-old Dorian Murray, who the world now knows as “D.”

The tight end met the tough kid from Westerly Monday night, as Dorian’s struggle with cancer was zipping around the world thanks to social media. In November, former Patriot Patrick Pass surprised Dorian with a visit. Both hung out with Dorian, signed autographs, and urged him to stay strong.

Dorian’s toughness is woven into almost four years of treatment for rhabdomyosarcoma, a pediatric cancer that was diagnosed when he was four. He’s been through a lot.

“The needles, the meds,” he said from his mom’s couch. “Everything we have to go through. It’s a lot to take.”

As his mom tells it, Dorian said he wanted to be famous on “the bridge in China.”In December, after a checkup indicated cancer cells were in Dorian’s spinal fluid, Dorian and his family made the decision to stop treatment just after the new year. Then, about three days ago, Dorian told his dad he had a goal.

“He meant the Great Wall of China,” Melissa Murray said. “But we knew that would be hard with the long travel and everything.”

So, Dorian adjusted his goal.

“I’m just thinking before I go to heaven to try to be famous as much as I can,” he said.

What followed was a social network tidal wave. A couple of posts on Facebook, a few more on Twitter, and before his family and friends knew it, the world responded to the hashtag, D-Strong.

“It’s like my little logo thing,” Dorian explained, holding up his arms in a pose Gronk would be proud of. “You have to like stay strong for D.”

Thousands have joined in the spirit, from New England’s Gronkowski to unknown men and women around the world.

And a picture of a man holding a D-Strong sign on that bridge in China. On Facebook and Twitter, the message is “we’re behind you, kid.”

“They’re just saying to keep fighting,” said Dorian. “They believe in me. And it’s just really nice to know that so many people have my back for me.”

He seemed older than 8 years old to us, with a sense of humor to match, despite what he’s faced, and still faces.

When we playfully asked for an ID, he held his own like someone far wiser than his years.

“I have my birth certificate,” he said, as the living room of friends and family erupted with laughter.

His mom and dad hope to make their son as comfortable and happy as possible in the coming weeks. And his mom wants the world to know more about pediatric cancer, including the survival rate of about 20 percent and the lack of funding.

She might some day start a foundation to get that message out there but for now, her goal is to help her son smile as much as possible as the world stands behind him.

In the meantime, a GoFundMe page has been set up to help the family with medical expenses.

People from all over the world, including China, Italy and America are taking pictures of themselves holding a sign reading #DStrong, to show Dorian they are behind him and that they want to help make his wish come true.

For updates on Dorian, visit the family’s Facebook page.