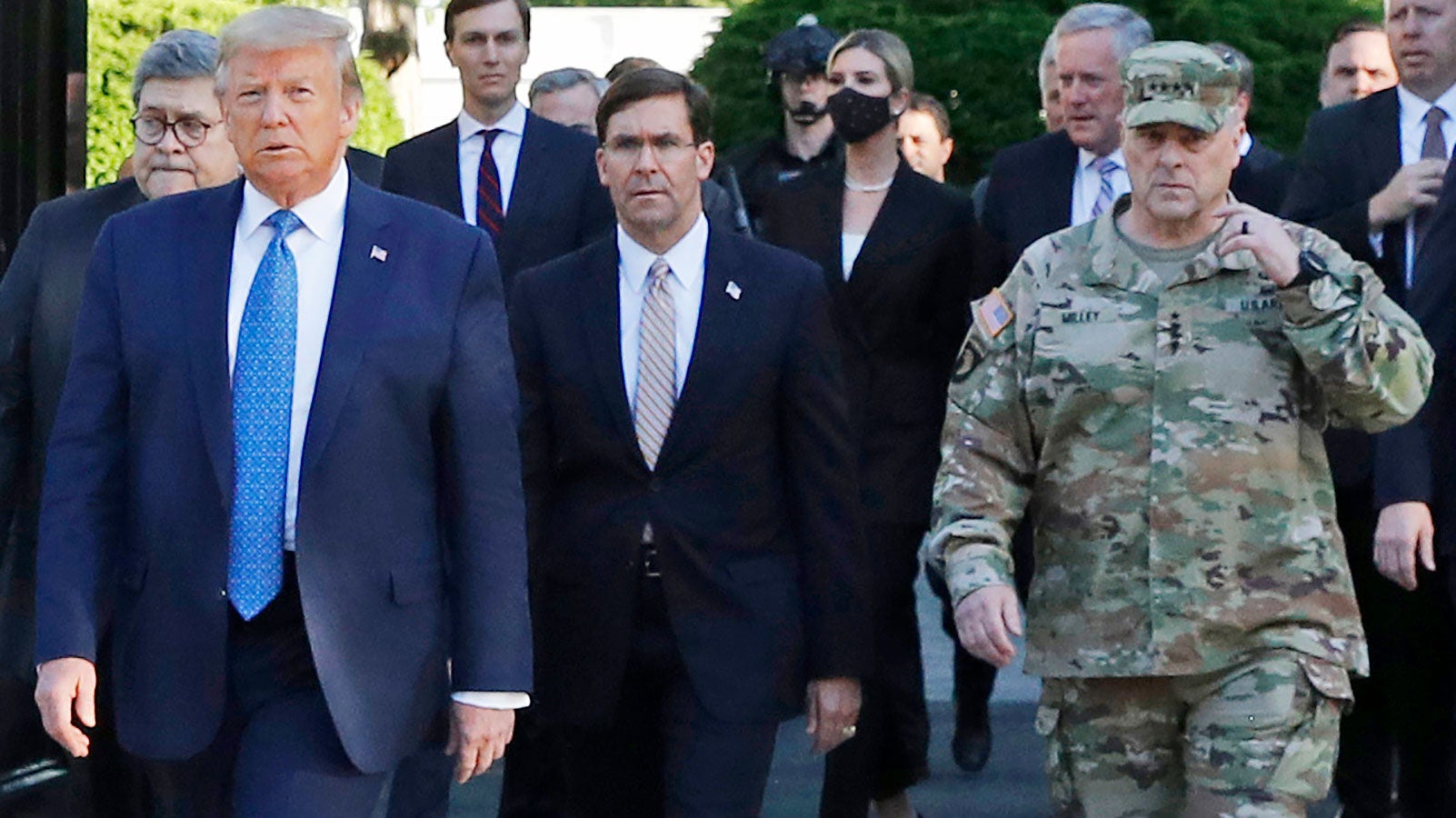 FILE - In this June 1, 2020 file photo, President Donald Trump departs the White House to visit outside St. John's Church, in Washington. Part of the church was set on fire during protests on Sunday night. Walking behind Trump from left are, Attorney General William Barr, Secretary of Defense Mark Esper and Gen. Mark Milley, chairman of the Joint Chiefs of Staff. Milley says his presence “created a perception of the military involved in domestic politics.” He called it “a mistake” that he has learned from. (AP Photo/Patrick Semansky via CNN)
by: Ryan Browne and Barbara Starr, CNN
Posted: Jun 11, 2020 / 10:36 AM EST / Updated: Jun 11, 2020 / 10:36 AM EST

(CNN) — America’s top general is apologizing for appearing in a photo-op with President Donald Trump after the forceful dispersal of protesters outside the White House last week, saying the move was a “mistake.”

Gen. Mark Milley, the Chairman of the Joint Chiefs of Staff also said that he was “outraged” by the killing of George Floyd and added that the protests it sparked spoke to “centuries of injustice toward African Americans.”

“As senior leaders, everything you do will be closely watched. And I am not immune. As many of you saw, the result of the photograph of me at Lafayette Square last week. That sparked a national debate about the role of the military in civil society,” Milley, said in a pre-recorded speech to a group of graduates from the National Defense University released on Thursday.

“I should not have been there. My presence in that moment and in that environment created a perception of the military involved in domestic politics. As a commissioned uniformed officer, it was a mistake that I have learned from, and I sincerely hope we all can learn from it,” he added.

Esper similarly acknowledged the problematic nature of the appearance, telling reporters at the Pentagon last week “I was not aware of a photo-op was happening,” adding that he tried “to stay out of situations that may appear political, and sometimes I’m successful with doing that, and sometimes I’m not as successful.”

In his speech, Milley also addressed the event that sparked the protests, the death of George Floyd while in the custody of Minneapolis police, as well as the challenges of racism within the military and American society.

“I am outraged by the senseless and brutal killing of George Floyd. His death amplified the pain, the frustration, and the fear that so many of our fellow Americans live with day in, day out,” Milley said.

“The protests that have ensued not only speak to his killing, but also to the centuries of injustice toward African Americans,” he added, saying “we should all be proud that the vast majority of protests have been peaceful.”

Defense officials have told CNN that Milley lobbied Trump against using active duty troops to quell some of the violent protests that broke out in the wake of Floyd’s death, recommending that local law enforcement backed by National Guard troops under local control handle the situation.

“We never introduced federal troops on the streets of America as a result of the combined efforts of the Guard and law enforcement at quelling the violence and de-escalating very very tense situations,” Milley said in his speech.

“While the military sets an example for civil society through our inclusiveness, we too have not come far enough. We all need to do better. For example, although the United States military has a higher proportion of African Americans serving in our ranks than in society at large, only 7% of our flag and general officers are African American,” he said, adding “we must, we can, and we will do better.”