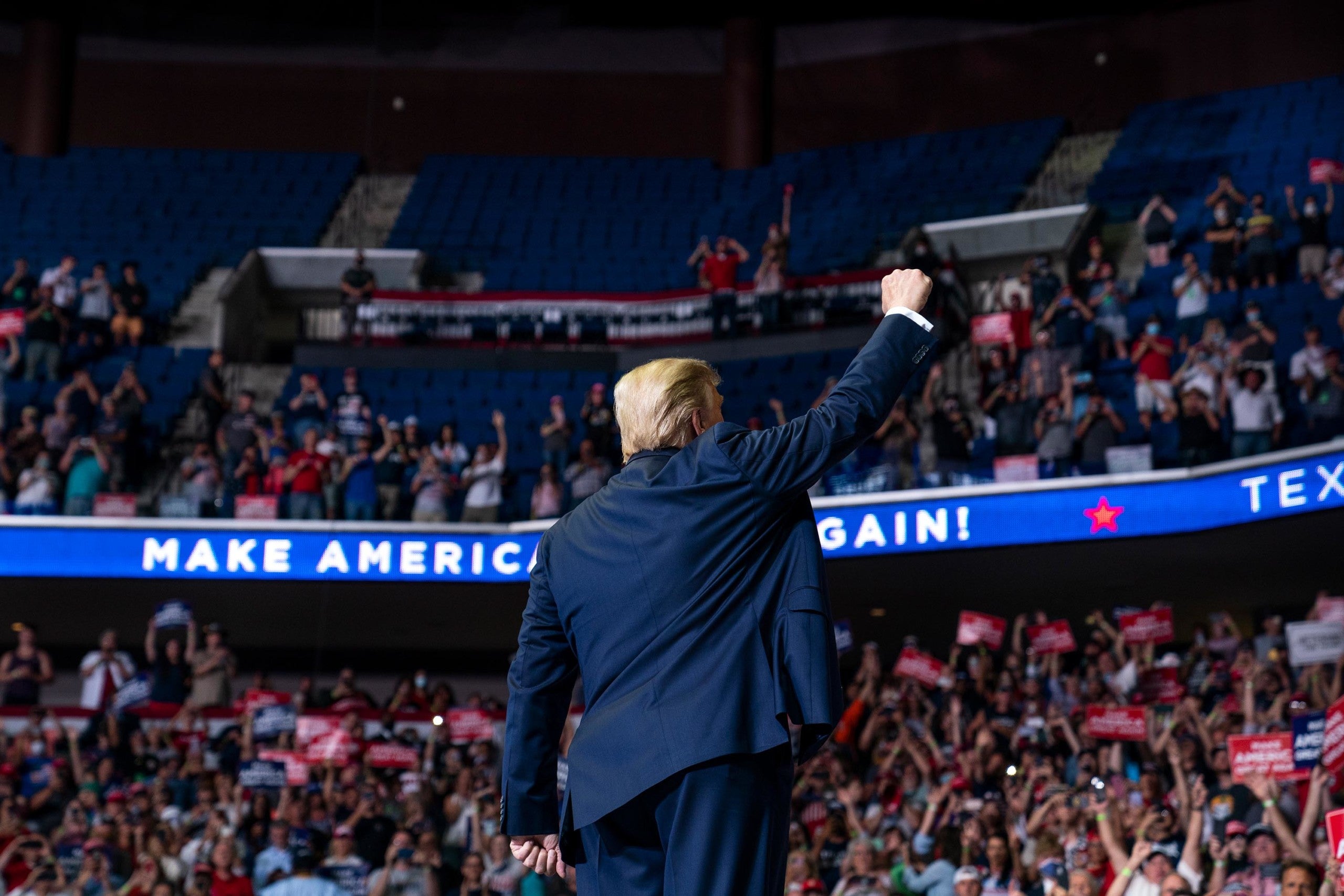 (CNN) — Swaths of empty blue seats and a vacant overflow venue in Oklahoma have led President Donald Trump’s aides to begin debating what his signature campaign rallies will look like going forward, people familiar with the matter say.

Ahead of the President’s visit on Saturday to Tulsa, there had been tentative plans to announce another rally for the near future, perhaps as early as the next two weeks.

Now, it remains unclear when — and how — Trump will move forward with his flagship political events. Some advisers suggested it could be weeks or even months before Trump attempts another rally, though as of Monday morning no decisions had been made on how to proceed.

When the President speaks Tuesday in Phoenix it will be to a group of young supporters, not a rally, though aides are now working to ensure that event appears full. And Trump will visit Wisconsin on Thursday in an official capacity.

Once viewed as a way to spring Trump’s campaign into a new phase — and improve the mood of a mostly homebound President — the Tulsa event instead devolved into what many of Trump’s aides acknowledge was an unfortunate mistake that distilled the President’s political woes five months before the general election.

Pictures of a half-full arena bore no resemblance to the sea of people Trump had been expecting and publicly predicting — a mistake, aides later said, because it raised expectations unrealistically.

Instead of delivering the fresh new rebuke on his rival Joe Biden that his campaign advisers were hoping for, Trump delivered a disjointed speech that seemed designed to entertain rather than drive votes to an audience that appeared sparse and subdued from his vantage point.

Instead of departing Tulsa with a boost, Trump appeared deflated as he returned to the White House with his tie hanging loose around his neck.

As coverage of the event focused on its shortcomings on Sunday, Trump only grew more upset.

By Monday morning, a debate had commenced over how to proceed — and whether the massive rallies that are the President’s political stock-in-trade are feasible or wise as he seeks to turn around a flagging reelection effort.

Trump’s campaign has blamed the lackluster turnout on protesters who scared away supporters or blocked them from entering, though CNN teams on the ground in Tulsa did not witness blocked entrances and reported heavy law enforcement presence in the secure area surrounding the Bank of Oklahoma Center.

Ultimately, just fewer than 6,200 people attended the rally, according to the Tulsa Fire Department. Plans for an overflow speech were canceled as fewer than 25 people gathered in the area it was meant to occur. Trump once predicted 20,000 people in the area with an additional 40,000 outside.

Few people around Trump believe rallies will be eliminated altogether. But the empty seats and vacant overflow lot in Tulsa were an indication that their formula needs rethinking amid a continuing pandemic and an altered political landscape.

There are discussions about finding outdoor venues where supporters might feel safer convening, the people familiar said. One campaign source suggested holding more airplane hangar rallies, a common feature of Trump’s last campaign that allowed him to visit a location without ever leaving the airport.

Other officials acknowledged that Tulsa was a sign even Trump’s supporters remain wary of large crowds as coronavirus continues to spread, a reality that may force his campaign to book smaller venues for greatly reduced audiences.

Trump has convened smaller rallies in the past, particularly as he campaigned during the 2018 midterm elections. He has filled suburban high school gyms and hangars at small regional airports easily, though the President himself has stated he prefers playing massive arenas where rock stars and sports teams sell out.

Whether Trump agrees to more smaller rallies remains to be seen. But aides do seem to uniformly believe that predicting massive turnout ahead of time is a mistake which only sets Trump and his team up for disappointment. Some White House aides were privately annoyed when campaign staffers were offering inflated predictions of the crowd size in public last week leading up to the event, believing the public forecasting would lead to embarrassment.

Yet it was the President himself who drove those predictions, stating publicly even as he was departing the White House on Saturday for Tulsa he was expecting record crowds.

“The crowds are unbelievable,” Trump said. “They haven’t seen anything like it.”