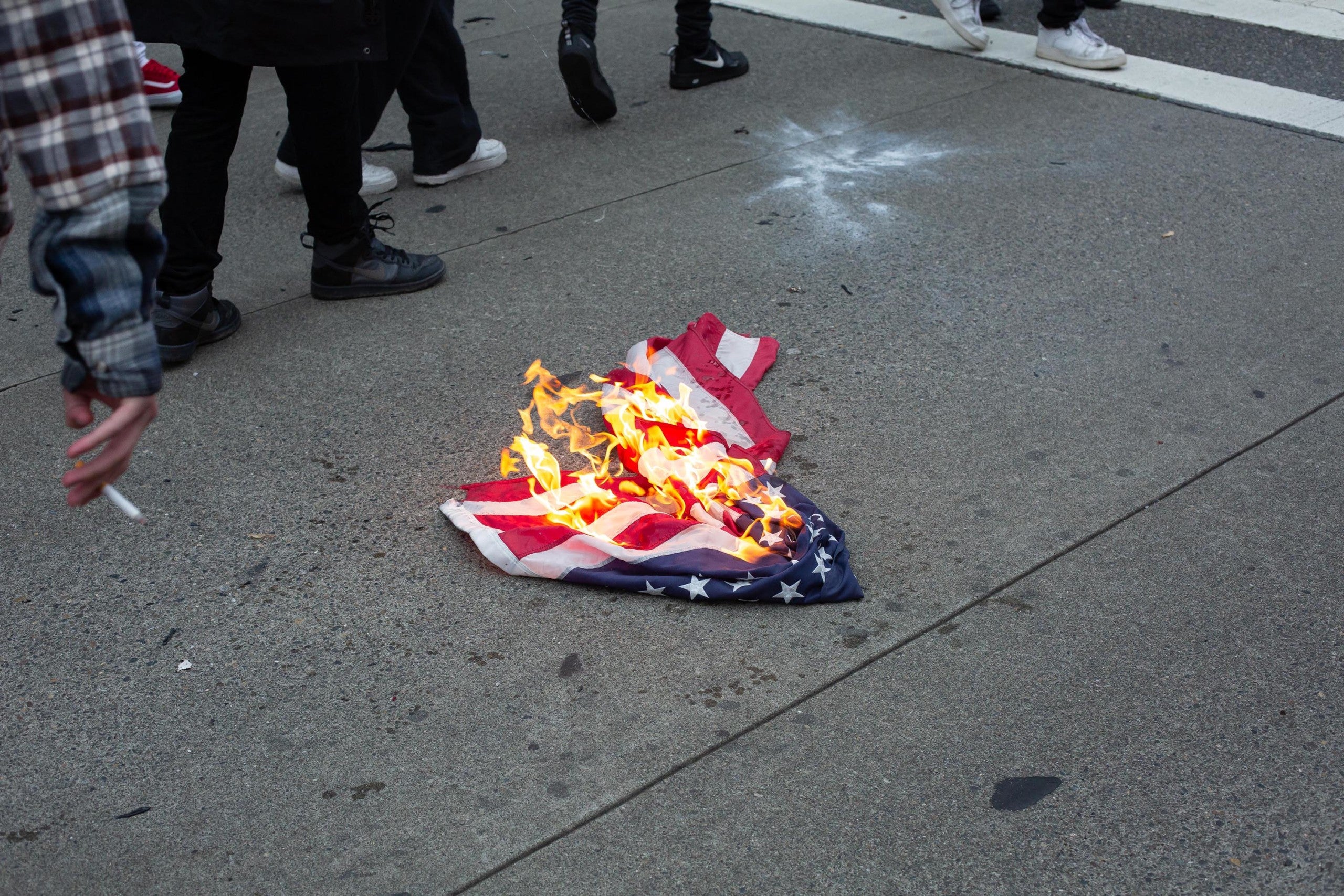 BELLEVUE, WA - MAY 31: A U.S. flag burns outside of Bellevue Square Mall while looting takes place on May 31, 2020 in Bellevue, Washington. Protests due to the recent death of George Floyd took place in Bellevue in addition to Seattle, with looting in Bellevue and at least one burned automobile there. (Photo by David Ryder/Getty Images)
by: Chandelis Duster, CNN
Posted: Jun 1, 2020 / 05:09 PM EST / Updated: Jun 1, 2020 / 05:09 PM EST

(CNN) — President Donald Trump said Monday that he’d support laws criminalizing flag burning, saying in a call with governors that it’s time for the Supreme Court to take up the issue again as nationwide protests have intensified over the death of George Floyd.

Trump’s comments follow nearly a week of protests across the country that at times have turned violent over the death of Floyd, a 46-year-old African American man who died at the hands of a police officer in Minneapolis. During the protests in some cities, people have vandalized buildings and looters have ransacked businesses. In Atlanta, protesters burned an American flag in front of CNN headquarters and photographers have captured images of flag burnings in Los Angeles and Washington state in recent days.

Trump, who as a candidate in 2016 proposed jail time or loss of citizenship for burning the American flag, called the act a “disgrace” on Monday and pledged support for an “anti-flag burning” statute.

“We have a different court and I think that it’s time that we review that again. Because when I see flags being burned — they wanted to crawl up flag poles in Washington and try and burn flags but we stopped them,” the President told governors, according to audio of the call obtained by CNN. “They’re weren’t able to do it. They would’ve done it if we didn’t stop them. I think it’s time to relook at that issue, hopefully the Supreme Court will accept that.”

He continued: “If you wanted to try to pass a very powerful flag burning statute again — anti-flag burning, I hope you’ll do it because we’ll back you 100% all the way. Okay? I hope some of you do it.”

Back in 1989, the court divided 5-4 on the issue holding that a demonstrators’ conviction for flag desecration was inconsistent with the First Amendment. The case concerned a political demonstration during the 1984 Republican National Convention in Dallas.

The late Supreme Court Justice Antonin Scalia, whom Trump has repeatedly praised, sided with the majority that ruled, “If there is a bedrock principle underlying the First Amendment, it is that the government may not prohibit the expression of an idea simply because society finds the idea itself offensive or disagreeable.”

Scalia spoke about the matter in a 2012 interview with CNN, saying that while he did not approve of flag burning, it is fundamentally protected by the Constitution and the Founding Fathers’ efforts to create a government not ruled by tyranny.

“If I were king, I would not allow people to go around burning the American flag. However, we have a First Amendment, which says that the right of free speech shall not be abridged — and it is addressed in particular to speech critical of the government,” Scalia said.

“That was the main kind of speech that tyrants would seek to suppress.”

And Senate Majority Leader Mitch McConnell, a Republican, wrote a 2006 op-ed for the Central Kentucky News titled “Flag stands for freedom, even to desecrate,” in which he defended the right to burn the flag.