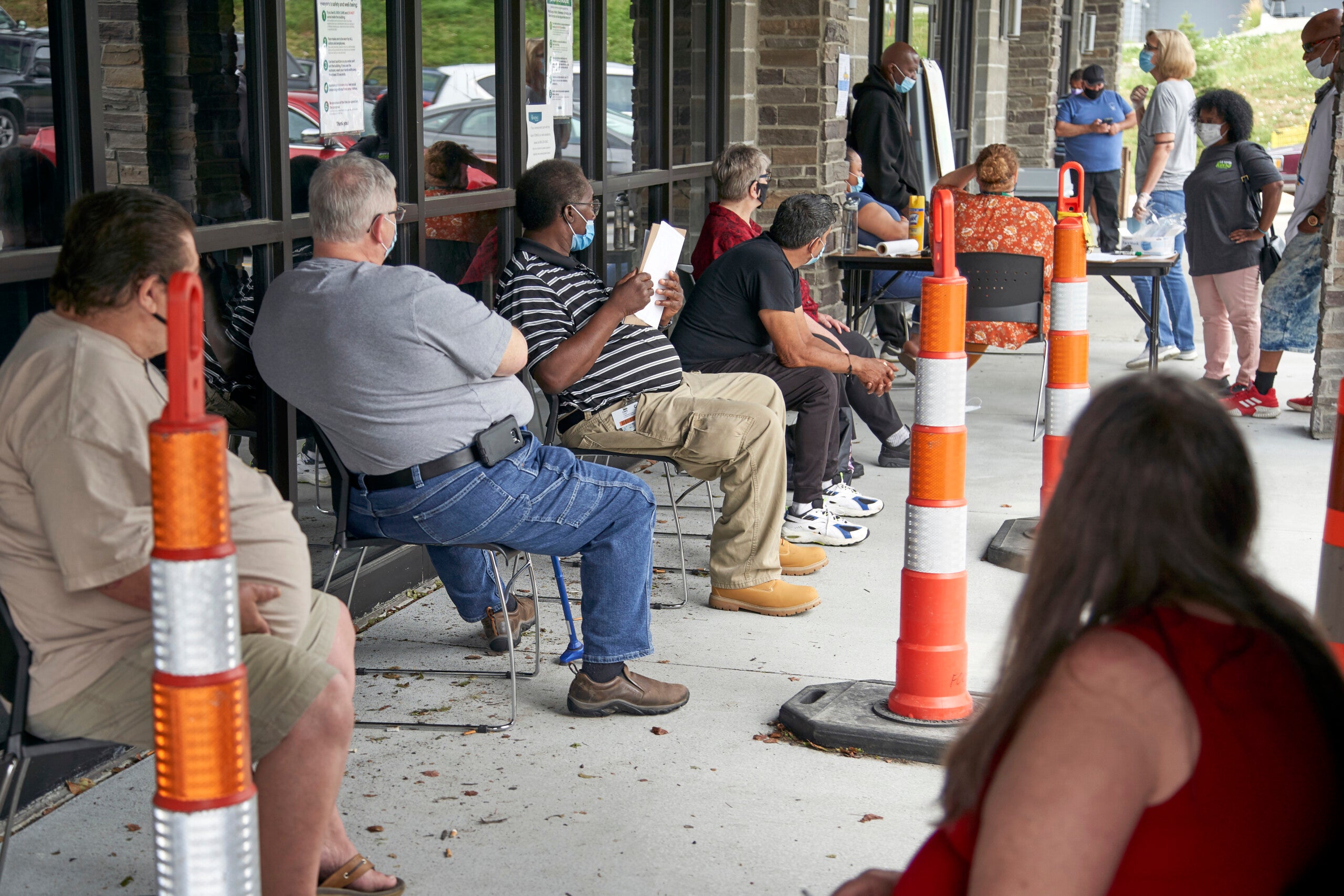 FILE - In this July 15, 2020, file photo, job seekers exercise social distancing as they wait to be called into the Heartland Workforce Solutions office in Omaha, Neb. For the first time in nearly 50 years, older workers are facing higher unemployment than midcareer workers, according to a study released Tuesday, Oct. 20, 2020, from the New School. (AP Photo/Nati Harnik, File)
by: CHRISTOPHER RUGABER AP Economics Writer
Posted: Oct 29, 2020 / 08:47 AM EST / Updated: Oct 29, 2020 / 08:47 AM EST

WASHINGTON (AP) — The number of Americans seeking unemployment benefits fell last week to 751,000, the lowest since March, but it’s still historically high and indicates the viral pandemic is still forcing many employers to cut jobs.

Rising confirmed virus cases in nearly every state, along with a cutoff in federal aid, are threatening to weaken the economy in the coming months. As temperatures fall, restaurants and bars will likely serve fewer customers outdoors. And many consumers may increasingly stay home to avoid infection. Those trends could force employers to slash more jobs during the winter.

The seven-day rolling average for confirmed new cases in the U.S. soared over the past two weeks from 51,161 to 71,832, according to Johns Hopkins University data.

The government said Thursday that growth rebounded sharply in the July-September quarter after an epic collapse in the spring, when the economy shrank at a 31.4% annual rate. Yet growth is believed to be slowing sharply in the final three months of the year to a roughly 3% annual rate.

With Congress having failed to agree on any further stimulus this year, millions of unemployed Americans who will lose all their jobless benefits in the coming weeks and months will likely pull back further on spending. Without another round of loans from the government, many small companies will also go out of business.

Thursday’s report from the Labor Department said the number of people who are continuing to receive unemployment benefits fell more than 700,000 to 7.76 million. The decline shows that some of the unemployed are being recalled to their old jobs or are finding new ones. But it also indicates that many jobless Americans have used up their state unemployment aid — which typically expires after six months — and have transitioned to a federal extended benefits program that lasts an additional 13 weeks.

The still-elevated number of jobless claims underscores that a full recovery from the pandemic recession remains far off. Job growth has slowed for three straight months, leaving the economy still 10.7 million jobs short of its pre-pandemic level. The unemployment rate remains high at 7.9%.

Layoffs have continued at some large companies. Boeing said Wednesday that it will now cut 30,000 jobs by the end of next year, almost one-fifth of its entire workforce, up from an earlier announcement that it would shed 19,000.