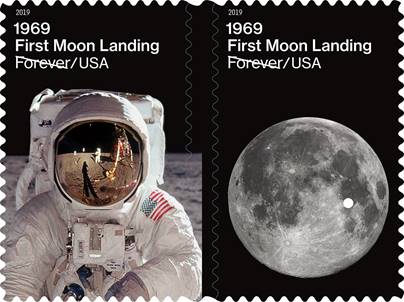 INDIANAPOLIS (WISH) — The United States Postal Service is celebrating the 50th anniversary of the first moon landing with a brand new Forever stamp.

USPS has issued the 1969: First Moon Landing Forever stamp in celebration of the 50th anniversary of the first moon landing.

“With the dedication of these stamps today, the Postal Service pays tribute to all those individuals with the right stuff — the astronauts, engineers, mathematicians, physicists, computer specialists and all the hidden figures, men and women, who worked behind the scenes to land Americans on the moon and bring them home safely,” said Thomas J. Marshall, the Postal Service’s general counsel and executive vice president, and the stamp ceremony’s dedicating official.

Two stamp designs commemorate the milestone. One features Neil Armstrong’s iconic photo of Buzz Aldrin in his spacesuit on the moon’s surface. The other, shows the landing site of the lunar module, Eagle, in the Sea of Tranquility.

Customers can purchase the stamps through The Postal Store, by calling 800-STAMP24, by mail through USA Philatelic or at Post Office locations nationwide.