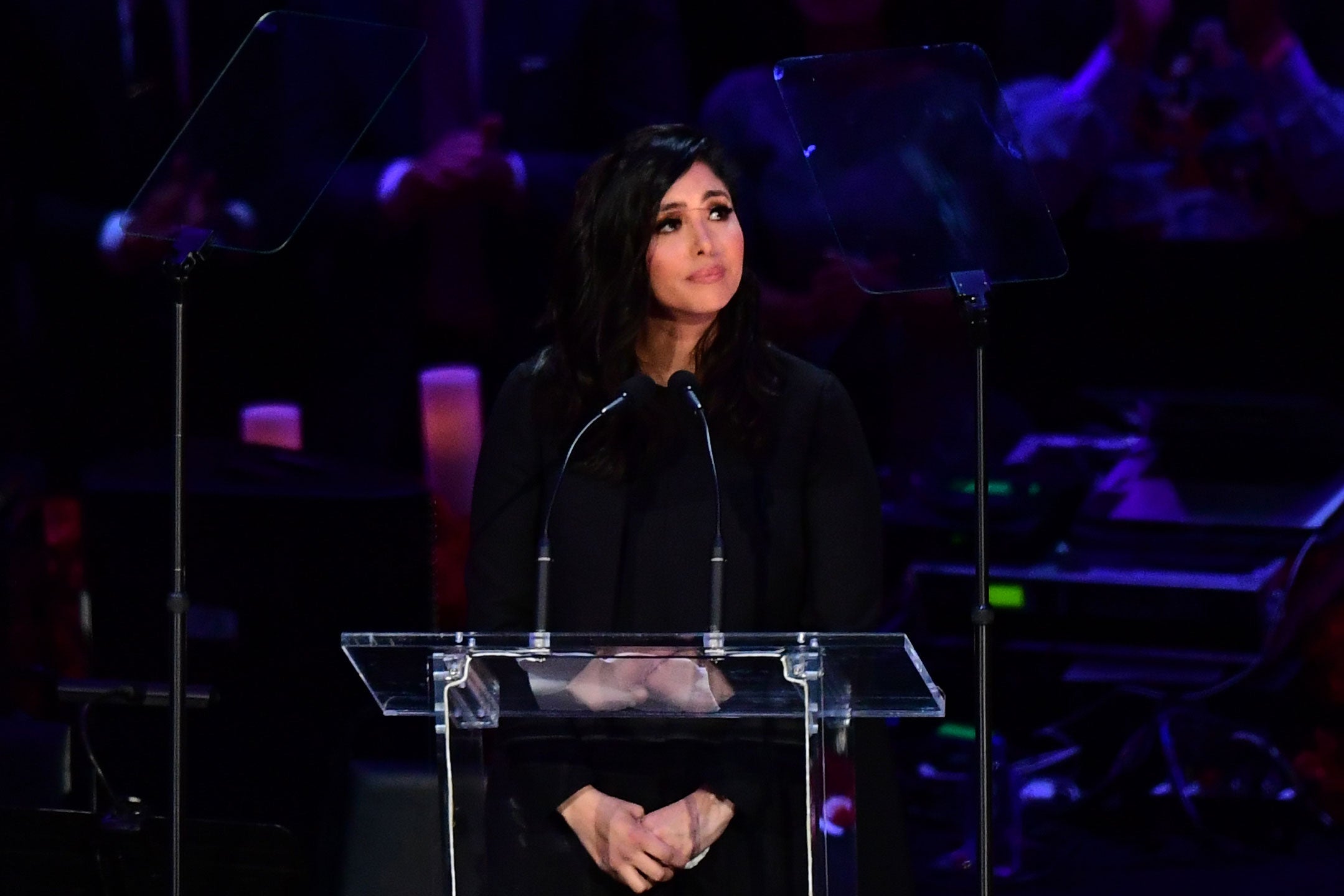 Kobe Bryant's wife Vanessa Bryant arrives to speak during the "Celebration of Life for Kobe and Gianna Bryant" service at Staples Center in Downtown Los Angeles on February 24, 2020. - Kobe Bryant, 41, and 13-year-old Gianna were among nine people killed in a helicopter crash in the rugged hills west of Los Angeles on January 26. (Photo by FREDERIC J. BROWN / AFP) (Photo by FREDERIC J. BROWN/AFP via Getty Images)
by: Chloe Melas and Paul LeBlanc, CNN
Posted: Jun 18, 2020 / 11:55 AM EST / Updated: Jun 18, 2020 / 11:55 AM EST

(CNN) — Vanessa Bryant, wife of the late Kobe Bryant, is urging Congress to pass a new helicopter safety bill named for her husband and daughter who were killed in a crash earlier this year.

“I strongly urge that the United States Congress pass a federal law that would improve the safety of helicopters operating in this country,” she said in statement. “I believe there is a chance that Kobe and Gianna would still be alive today if their helicopter had been equipped with the safety equipment required by this pending federal legislation.”

Her comments come after Democratic lawmakers on Thursday introduced the “Kobe Bryant and Gianna Bryant Helicopter Safety Act.” The legislation would require all helicopters certified to carry six or more people to be equipped with a Terrain Awareness and Warning System, a flight data recorder and a cockpit voice recorder.

“I believe that these safety measures will save many lives,” Bryant said of the bill.

“As passengers traveling on aircrafts we assume that proper safety measures are in order to prevent accidents from happening before we fly. It’s unfortunate that this is not the case and aircraft companies must do their part to protect lives.”

Similar legislation had been introduced by Rep. Brad Sherman of California in January following the crash that killed Kobe, Gianna and six others. Sherman, however, told CNN that the bill introduced Thursday was updated after the Bryant family contacted the relevant lawmakers to say they supported the effort.

Bryant said she was “deeply moved” when she learned of the legislation would be named for her husband and daughter.

“Having Kobe’s and Gianna’s names associated with this federal law that has the potential to save countless lives would be a fitting tribute to their memory,” she said.

Bryant also proposed that the helicopter industry “consider renaming the black box to Mamba 8 Box in honor of the 3 young Mamba team players, the 2 Mamba coaches and the 3 Mamba parents onboard, equaling 8.”

The group had been heading to the Mamba Sports Academy in Thousand Oaks, California, for a youth basketball game when their helicopter crashed.

In February, Bryant filed a lawsuit against Island Express Helicopters, alleging in part that the pilot failed to safely operate the aircraft. The suit was filed the same day Kobe Bryant’s memorial was held at the Staples Center.

At the time of the filing, CNN reviewed FAA records and found that Island Express was only certified for using visual flight rules (VFR) but that the conditions the day of the crash should have required instrument flight rules (IFR), something this helicopter was not licensed or certified for, according to the suit.

Vanessa and Kobe Bryant were married in 2001 and were just a few months away from their 19th wedding anniversary. Vanessa Bryant has been candid on social media about missing her late husband and their daughter. Along with Gianna, they had three other daughters: Natalia, Bianka and Capri. Gianna would have turned 14 on May 1.

At Kobe Bryant’s memorial, Vanessa Bryant said, “I couldn’t see him as a celebrity nor just an incredible basketball player. He was my sweet husband and the beautiful father of my children. He was mine. He was my everything.”