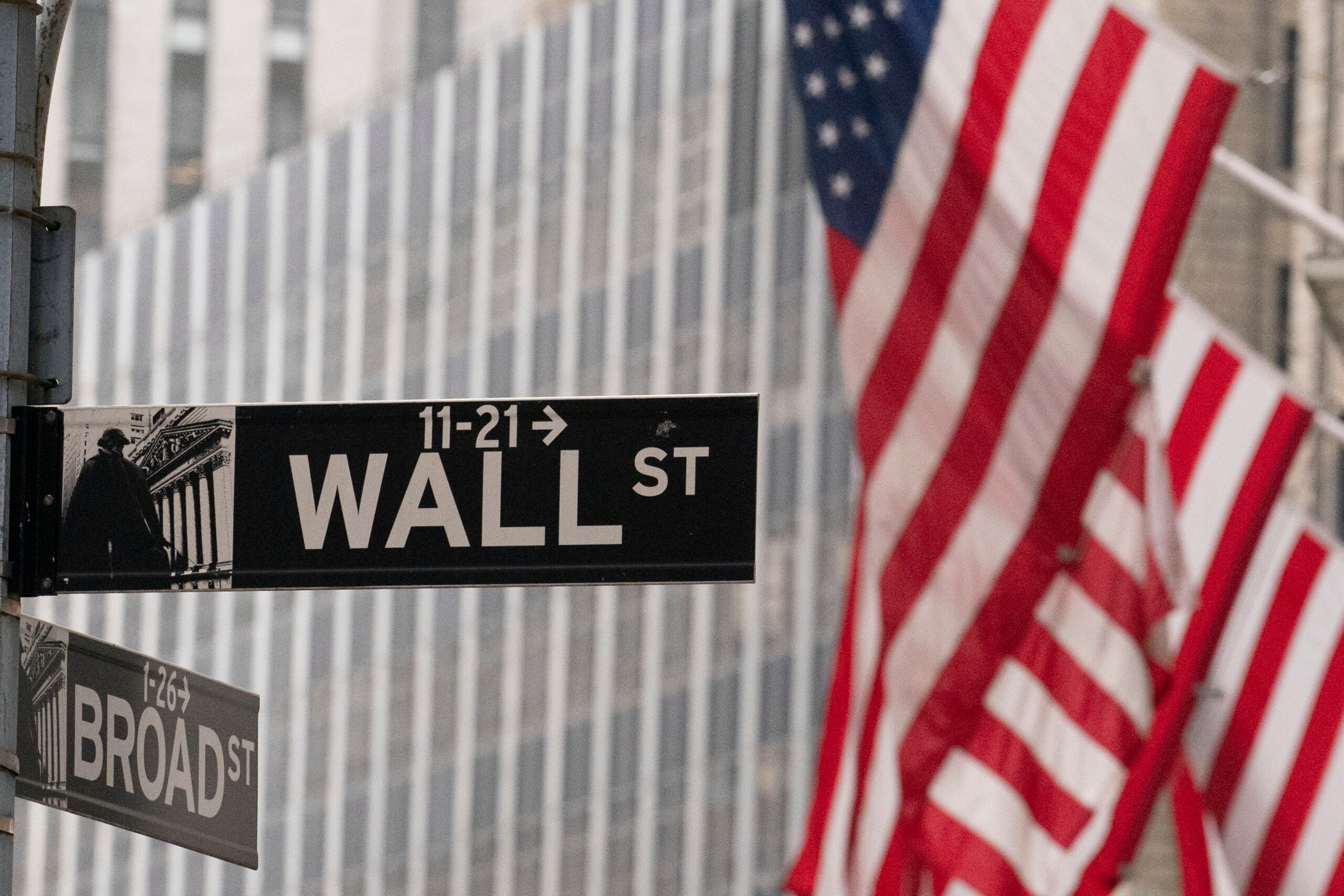 A street sign for Wall Street is seen outside the New York Stock Exchange, Thursday, Nov. 5, 2020. U.S. futures and world shares have surged as investors await the outcome of the U.S. presidential election and embrace the upside of more gridlock in Washington. (AP Photo/Mark Lennihan)
by: STAN CHOE AP Business Writer
Posted: Nov 5, 2020 / 11:32 AM EST / Updated: Nov 5, 2020 / 11:32 AM EST

NEW YORK (AP) — Stocks are still riding Wall Street’s post-election wave Thursday, as markets bet on the continuation of several business-friendly policies, and the S&P 500 is rallying 2.2% toward its biggest weekly jump since April.

Markets are banking on Tuesday’s election leading to split control of Congress, which could mean low tax rates, lighter regulation on businesses and other policies that investors like remain the status quo. The election still hasn’t made clear who will run the White House next year, though Joe Biden is pushing closer toward the needed mark.

The S&P 500 is on pace for its fourth straight gain of more than 1%, and a 7.7% jump for the week. That would be its best week since the market was exploding out of the crater created in February and March by panic about the coronavirus pandemic.

Technology stocks were helping to lead the way, as they have through the pandemic and for years before that. Rising expectations that Republicans can hold onto the Senate are easing investors’ worries that a Democratic-controlled Washington would beef up antitrust laws and go after Big Tech more aggressively.

Apple, Microsoft, Amazon, Facebook and Google’s parent company were all up between 1.3% and 3.2%. They’re also the five biggest stocks in the S&P 500 by market value.

Broadly, markets are seeing split control of Congress as a case of what Mizuho Bank calls “Goldilocks Gridlock.”

Investors see cause for optimism if either Biden or President Donald Trump ultimately wins the presidency, and “what matters for equities is not so much who wins the election” but that a clear winner emerges, strategists at Barclays wrote in a report.

But the expectation that Biden has a chance of winning has also raised hopes that U.S. foreign policies might be “more clear,” said Jackson Wong, asset management director of Amber Hill Capital. He added, “investors are cheering for that. That’s why the markets are performing well.”

Wall Street’s rally was widespread, with more than 90% of stocks in the S&P 500 higher. Qualcomm jumped 12.5% for the biggest gain in the index after it reported stronger revenue and profit for the latest quarter than analysts expected.

That’s been the strongest trend through this earnings season, which is close to wrapping up. S&P 500 companies are on pace to report a drop in profits of roughly 8% from year-ago levels. That’s much milder than the nearly 21% decline Wall Street was forecasting at the start of last month.

Still, many analysts warn volatility may still lie ahead. Big swings could return as the threat of a contested, drawn-out election still looms.

Trump’s campaign has filed legal challenges in some key swing states, though it’s unclear whether they can shift the race in his favor. A long court battle without a clear winner of the presidency could raise uncertainty and drag down stocks, analysts say.

Split control of Washington also carries potential downsides. Gridlock may lessen the chances of the U.S. government coming together on a deal to deliver a big shot of stimulus for the economy, for example.

That’s something investors and economists have been asking for since the last round of benefits for laid-off workers and other benefits expired. A report on Thursday showed that more workers filed for unemployment last week than economists expected, though the number was slightly better than the week before.

Investors are still hoping Washington can agree on more stimulus for the economy, though they say it likely won’t be as big as it could have been following a Democratic sweep.

If Congress and the White House can’t come to a deal, the pressure rises on the Federal Reserve to do more to support the economy, if it can. The central bank has already slashed interest rates to record lows and stepped forcefully into the bond market to prop up prices.

It will announce its latest decision on interest-rate policy in the afternoon. Investors don’t expect it to make any major changes, at least not yet.

The yield on the 10-year Treasury dipped to 0.76% from 0.77% late Wednesday. It had been above 0.90% earlier this week, when markets were still thinking a Democratic sweep was possible that could lead to a big stimulus package for the economy.

The pandemic continues to weigh on economies around the world, with counts rising at particularly troubling rates across much of Europe and the United States. Several European governments have brought back restrictions on businesses in hopes of slowing the spread.

In the U.S., even if the strictest lockdowns from the spring don’t return, the worry is that the worsening pandemic could change consumers’ behavior enough on its own to undercut companies’ profits.

In London, the FTSE 100 rose 0.7% as England began a four-week lockdown that will keep closed all shops selling items deemed to be non-essential, such as books and clothes. The Bank of England increased its monetary stimulus by more than expected to help the economy weather the new lockdown measures.