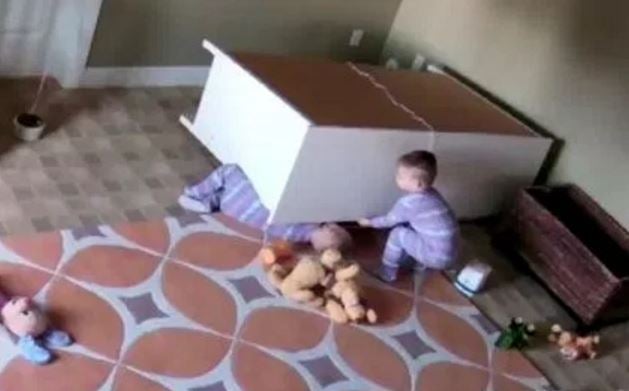 Life with twins can be pretty stressful. Just ask Kayli Shoff, the boys’ mother. Bowdy and Brock are almost 2 1/2 and they’re super rambunctious.

But last week, Shoff saw a horrifying video on the twin boys’ room monitor after noticing their dresser had fallen over.

“Because I usually hear everything. We didn’t hear a cry. We didn’t hear a big thud, so we just-we woke up, looked at the camera, we’re like ‘What’s going on? Are they still sleeping?’ Then we saw that it was all the way down they were just still playing. So we didn’t know if it had landed on them,” Shoff told KSL.

In the scary video, the two boys are playing on the dresser, when it tips over and traps Brock underneath. That’s when Bowdy jumps into action.

Shoff described the scene to KSL, “Bowdy just came around and, again, assessed the situation, thinking ‘I need to help my twin brother. What do I do here?’ So, he sat there and thought. Tried to left it at first. Obviously, that didn’t work. So he just pushed with all of his might and it just pushed it right off of his brother. I really believe in the twin bond. You always hear that. And I really think these two have it.”

Shoff said she immediately bolted the dresser to the wall and decided to share the scary video to help raise awareness about the dangers of unsecured furniture. “Everybody needs to bolt down their dressers to the wall. I mean, we just didn’t think about it. So, accidents are gonna happen…so accidents are gonna happen. So, we just want awareness to this one accident that happened and hope that it doesn’t happen to any other family.”