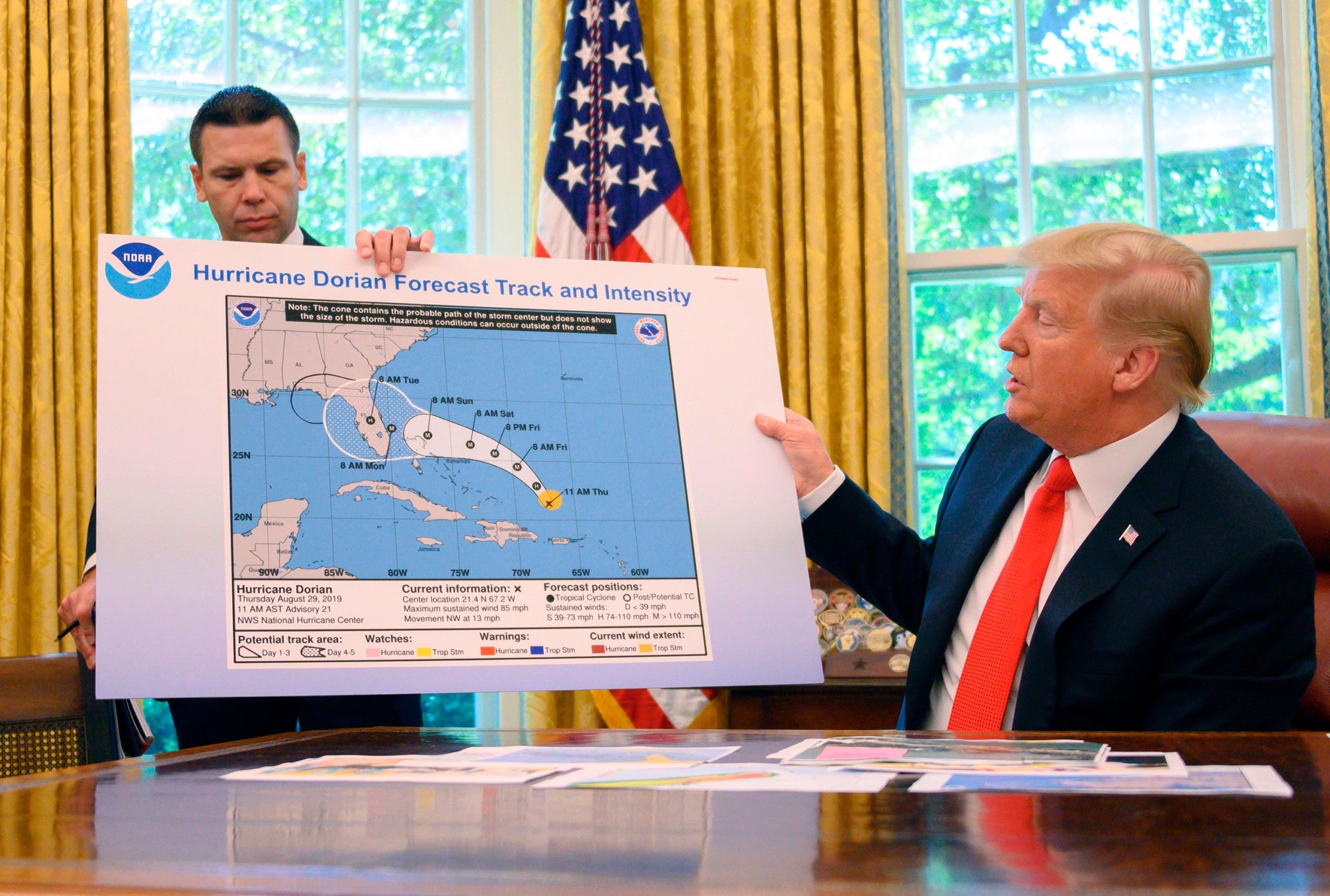 US President Donald Trump and Acting US Secretary of Homeland Security Kevin McAleenan update the media on Hurricane Dorian preparedness from the Oval Office at the White House in Washington, DC, September 4, 2019. (Photo by JIM WATSON / AFP) (Photo by JIM WATSON/AFP via Getty Images via CNN)
by: Paul LeBlanc, CNN
Posted: Jul 10, 2020 / 05:56 AM EST / Updated: Jul 10, 2020 / 05:56 AM EST

(CNN) — The Commerce Department Inspector General on Thursday delivered a harsh rebuke of the department in a new report detailing how pressure from the White House prompted a statement from the National Atmospheric and Oceanic Administration contradicting a local National Weather Service office during Hurricane Dorian in 2019.

The report from Inspector General Peggy Gustafson declares that the statement — which backed President Donald Trump’s erroneous claim that Alabama had been in the storm’s path — could have far-reaching implications discrediting public trust in the NWS.

“The broader, longer-term consequence is that NOAA’s rebuke of the NWS Birmingham office could have a chilling effect on NWS forecasters’ future public safety messages, as well as undercut public trust in NWS forecasts,” the report states.

During Dorian’s approach to the United States last year, Trump showed members of the media an image of the storm’s potential path, which included an extension of the official forecast into an area of Alabama that was clearly drawn in permanent marker.

Responding to calls of concern, the National Weather Service’s Birmingham, Alabama, office tweeted out, “Alabama will NOT see any impacts from #Dorian. We repeat, no impacts from Hurricane #Dorian will be felt across Alabama. The system will remain too far east.”

But on September 6, NOAA released a statement saying, “The information provided by NOAA and the National Hurricane Center to President Trump and the wider public demonstrated that tropical-storm-force winds from Hurricane Dorian could impact Alabama. … The Birmingham National Weather Service’s Sunday morning tweet spoke in absolute terms that were inconsistent with probabilities from the best forecast products available at the time.”

Thursday’s report lays out how then-acting White House chief of staff Mick Mulvaney told Commerce Secretary Wilbur Ross that “it appears as if the NWS intentionally contradicted the President. And we need to know why.”

Trump, Mulvaney wrote, “wants either a correction or an explanation or both.”

“While Mr. Mulvaney issued a request for ‘a correction or an explanation or both,’ the Department, and significantly Mr. Walsh and Mr. Dewhirst, bear responsibility for transforming what could be interpreted as an innocuous request for an explanation of the NWS Birmingham tweet into a request that required a publicly issued statement that rebuked NWS Birmingham,” the report states.

“In the end, Mr. Walsh and Mr. Dewhirst were poorly equipped for formulating a response to the incoming request that also protected NOAA’s best interests.”

Walsh, however, wrote in a response attached to the report that the conclusions from the Commerce Department IG “are completely unsupported by any of the evidence or factual findings that the report itself lays out.”

“The Inspector General instead selectively quotes from interviews, takes facts out of context, portrays events as related to one another without any evidence establishing a connection and ignores basic governance structures at the Department of Commerce,” he wrote.

Sean Brebbia, the acting deputy general counsel for the Commerce Department’s Office of Special Projects, said the report didn’t find that department employees did anything wrong.

“The absence of any formal recommendation shows that there were no major flaws in the Department’s handling of this situation,” Brebbia wrote.

Thursday’s report comes after a scientific misconduct investigation earlier this month found that NOAA officials violated their ethical standards and scientific integrity policy when they issued these conflicting statements during Hurricane Dorian.

That investigation found that NOAA leadership’s actions during the storm’s approach violated the agency’s ethical and scientific standards.