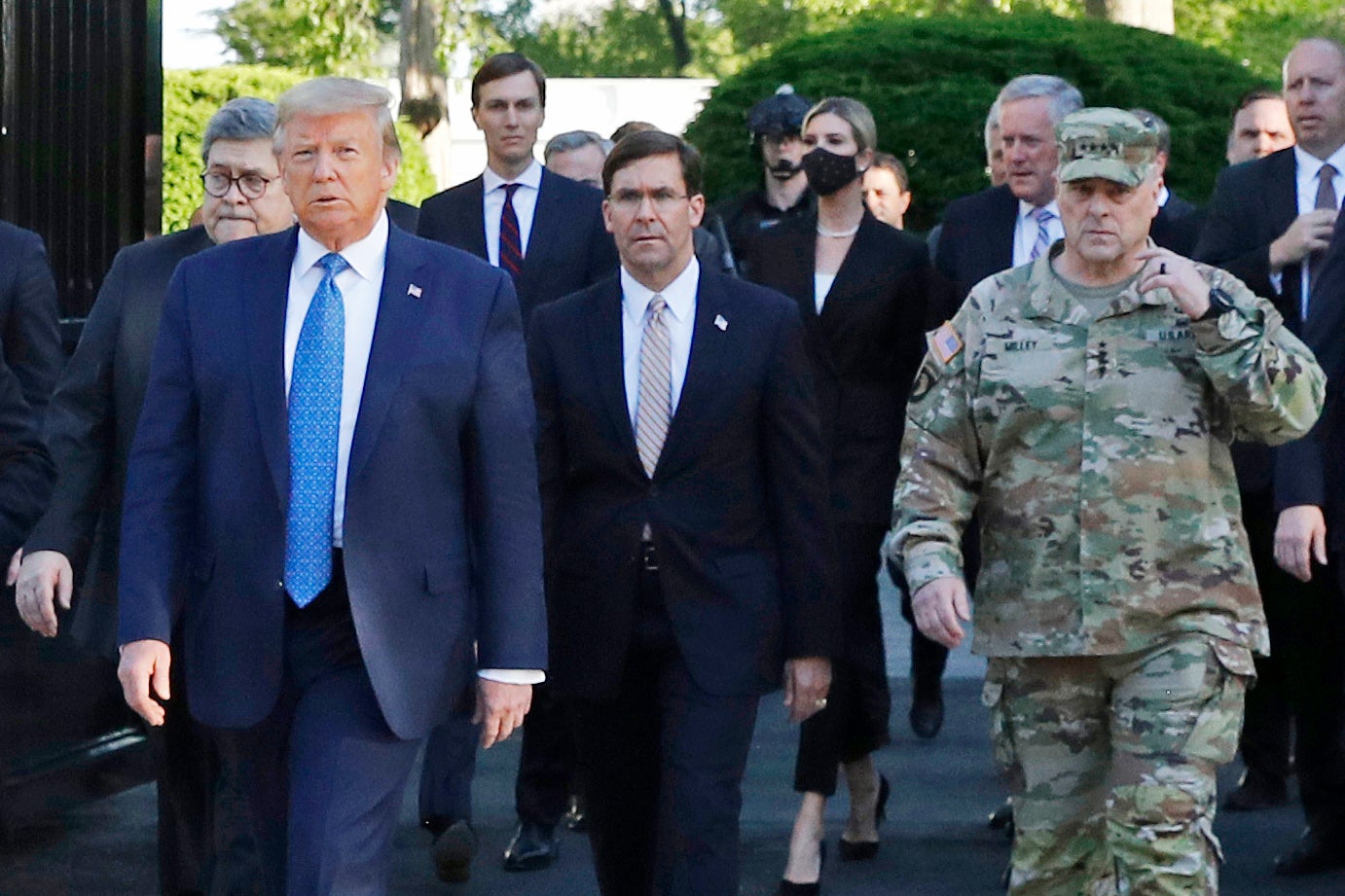 FILE - In this June 1, 2020 file photo, President Donald Trump departs the White House to visit outside St. John's Church, in Washington. Part of the church was set on fire during protests on Sunday night. Walking behind Trump from left are, Attorney General William Barr, Secretary of Defense Mark Esper and Gen. Mark Milley, chairman of the Joint Chiefs of Staff. Milley says his presence “created a perception of the military involved in domestic politics.” He called it “a mistake” that he has learned from. (AP Photo/Patrick Semansky)
by: Jeremy Herb, Vivian Salama and Kaitlan Collins, CNN
Posted: Jun 12, 2020 / 05:23 AM EST / Updated: Jun 12, 2020 / 05:23 AM EST

(CNN) — Chairman of the Joint Chiefs Gen. Mark Milley did not give the White House a heads up before he released a recorded a video on Thursday admitting it was a “mistake” to appear in a photo-op last week with President Donald Trump, two administration officials told CNN.

Milley’s apology — in which he declared unequivocally “I should not have been there” — was a remarkable admission for the four-star general, let alone from a top official in an administration led by a President known for his refusal to apologize.

The pre-recorded address was another sign of the strain that’s emerged between the Pentagon and the White House in the wake of involving the National Guard in response to protests across the country and the President considering deploying active-duty troops.

But Milley’s decision to express his regrets over the photo-op also reflected the different situation the Pentagon’s military and civilian heads face in the fallout from the response to protests sparked by the killing of George Floyd.

Defense Secretary Mark Esper is under fire after publicly breaking with Trump over the prospect of active-duty troops being deployed against protesters last week, an episode that prompted Esper to contemplate resigning and continues to fuel questions about whether Esper will remain as the Pentagon’s civilian leader.

While Esper’s job doesn’t appear to be in imminent jeopardy, his influence inside the White House is now in question. Trump and national security adviser Robert O’Brien have been losing faith in Esper for months now, well before he announced he was opposed to invoking the Insurrection Act, according to two current and one former administration officials.

The lack of a reaction inside the White House to Milley’s apology may also be a reflection of Trump’s personal affection for Milley. According to the former administration official, Trump “loved” Milley and pushed for him to become the next chairman of the Joint Chiefs in 2018, even though Milley’s predecessor, Dunford, and then-Defense Secretary James Mattis initially favored someone else for the role.

Still, the situation is delicate for both Pentagon leaders. Esper and Milley have to deal with the fallout from former top Pentagon officials, including Mattis, publicly denouncing Trump over his support for deploying active-duty troops on US soil against Americans protesting police violence.

And Esper and Milley are facing pointed questions from congressional Democrats, who aren’t ready to move on yet from their role in the protest response and are unhappy after the Pentagon leaders would not testify before the House Armed Services Committee.

Minutes before protesters were forcefully cleared from Lafayette Square outside the White House on June 1, Milley was spotted alongside Attorney General William Barr surveying the scene. After the protesters were dispersed and Trump spoke in the Rose Garden, Milley, Esper and other senior officials joined Trump to walk through the empty grounds to St. John’s Church.

Later that night, Milley was seen walking the streets of Washington in his battle fatigues to observe the National Guard operations, which included the use of a helicopter flying at low altitude, an incident that’s now under investigation.

“I should not have been there,” Milley said of the photo-op in a pre-recorded speech to a group of graduates from the National Defense University that aired Thursday. “My presence in that moment and in that environment created a perception of the military involved in domestic politics. As a commissioned uniformed officer, it was a mistake that I have learned from, and I sincerely hope we all can learn from it.”

After the White House events last week, Milley talked to longstanding mentors about “the situation” he found himself in, according to a defense official. A spokesman for Milley declined to comment beyond his recorded remarks.

“I support his statement in both substance and spirit regarding the recent presidential visit to St. Johns,” South Carolina Sen. Lindsey Graham, a close Trump ally, said on Twitter. “General Milley is a tremendous military leader who understands the long tradition of maintaining an apolitical, nonpartisan military.”

Rep. Adam Kinzinger, an Illinois Republican, told CNN it was “totally appropriate” for Milley to speak out.

“If Gen. Milley felt like he shouldn’t have been present in that moment then I think it was right for him to speak out. When I saw him accompanying the President, I did not feel what some people felt, but he is the general who can understand how that would be perceived,” Kinzinger said.

Esper and Milley are also facing scrutiny at the other end of Pennsylvania Avenue from congressional Democrats. House Armed Services Chairman Adam Smith has been pushing for Milley and Esper to testify before his committee about the military’s role in responding to the protests, sharply criticizing their failure to appear.

“We understand that the White House may be preventing you from testifying, obstructing Congress’ ability to conduct its constitutionally charge oversight responsibility,” Smith said in a statement this week.

But Smith’s criticism of Milley has been more tempered compared to Esper. On a conference call with reporters earlier this month, the day after the photo-op, Smith said he couldn’t say whether he had confidence in Esper. But he said Milley may have simply “misread” the optics of the chairman of the Joint Chiefs moving through the nation’s capital in combat fatigues.

Milley and Esper responded to Smith with a letter Wednesday, confirming active-duty troops never entered Washington, but adding that “Congress has given the President the authority to use active duty military forces for domestic law enforcement under certain conditions specified in the Insurrection Act.”

Some Democrats were skeptical of Milley’s apology Thursday. Democratic Sen. Chris Murphy of Connecticut took issue with Milley’s comments expressing regret over what he deemed “a perception” of the military’s involvement in domestic politics.

“What is he talking about it? There wasn’t a ‘perception’ that the military was involved in domestic politics,” Murphy tweeted. “The military was knee deep. National Guard troops were everywhere. Recon planes were flying overhead. Milley was marching through the streets overseeing it all.”

Esper joined O’Brien, Secretary of State Mike Pompeo and Barr at the State Department Thursday morning to announce Trump had authorized sanctions against International Criminal Court officials. The four all spoke at the event and had initially planned to take questions from the media, but instead delivered prepared statements and left without doing so.

It was just the latest question surrounding Esper’s public appearances in recent days as his job security has been raised. Some of Trump’s allies came to Esper’s defense last week following his public break with the President, according to sources familiar with the matter.

Esper now finds himself in a difficult position, as he was already facing skepticism from the West Wing and the National Security Council over offering a less than full-throated defense of the President and his policies, according to multiple administration officials.

O’Brien has spoken to the President numerous times about Esper’s remarks. Trump was irritated by Esper’s comments in December in an interview with Fox News’ Bret Baier in which Esper said Trump was “just another one of many bosses I’ve had and you’ve had … that you learn to work with.” O’Brien, by contrast, almost never breaks with the President in his public remarks.

O’Brien and Esper have also been at odds over executing the President’s vision for the Navy, according to multiple administration officials. The President is looking to expand to a 355-ship fleet, but Esper had not embraced the idea, the officials said. O’Brien was a key figure in the firing of former Secretary of the Navy Richard Spencer last year, despite Esper’s efforts to save him, in order to clear the way for an expanded Navy, the officials said.

O’Brien, who took over as national security adviser last September, is said by multiple administration officials to have expressed some level of interest in the job of either secretary of state or secretary of defense, should either of those positions become available.