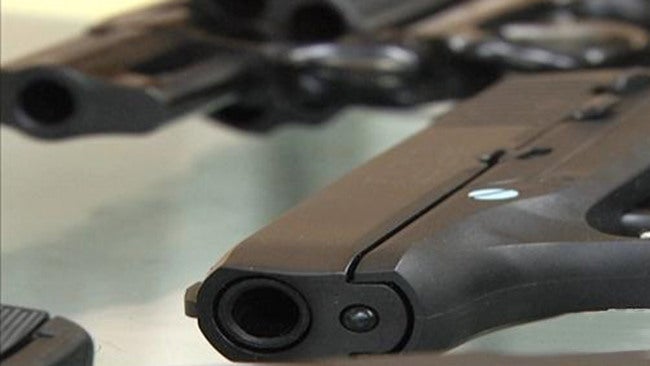 (CNN) — Young men hoping to join a White supremacist group spoke about hosting paramilitary trainings and how to legally bring firearms to those events, according to secret recordings of vetting calls published by the Southern Poverty Law Center Thursday.

Some 83 hours of calls with more than 100 participants linked to The Base group were analyzed by the SPLC, which monitors hate, for a new podcast, “Sounds Like Hate.”

Military training or knowledge of firearms was an important asset, according to the released calls. So was having a place to train.

One of the people in the calls trying to join the Base says he is 17 years old and offers his mother’s property for a training exercise.

“What date would be best in January for everybody?” the caller, who gave a pseudonym of Erik, asks the group. Two members, apparently vetting ‘Erik’ for membership, talk about stocking up on ammunition before the event. One talks about having blown through a lot of ammunition at a prior meeting. One offers to place orders and ship them for others.

That meeting appears to have been postponed, according to the calls, because Erik says his mother got nervous. It is unclear if it ever took place. But it gives insight into what the group values, how they operate, and how they view themselves.

The SPLC’s release of parts of the calls comes at a time when US intelligence services say domestic violent extremists, specifically White supremacist groups are the “the most persistent and lethal threat in the Homeland.”

The calls, dating from 2018 until January 2020, were supplied by a confidential source, said Jamila Paksima, co-host of the podcast. The authenticity was verified by subject matter experts who recognized the leader’s voice from previous audio appearances and were able to verify other corroborating details, Paksima told CNN.

The man at the center of most of the calls is Rinaldo Nazzaro, the group’s leader, who the SPLC says now lives in St. Petersburg, Russia.

CNN contacted Nazzaro via an e-mail address attached to his name regarding the leak of the secret calls.

He did not dispute that he was the leader of the group, but challenged its characterization.

“The Base is a survivalism and self-defense network. Our objective is sharing knowledge and training to prepare for crisis situations,” Nazzaro said in an e-mail to CNN. “The Base is not a neo-Nazi organization or a terrorist group. We do not encourage violence beyond self-defense situations.”

In the encrypted calls aired on the podcast, Nazzaro said being “pro-White” was the main criteria for membership, adding there were many Nazis. “Most of us are national socialists, but there are others who just consider themselves White nationalists,” he told one caller.

Federal authorities have said alleged members of The Base have talked about forming a White ethno-state and “committing acts of violence against minority communities,” including Black and Jewish people.

Jonathan Lewis, a research fellow at the Program on Extremism at George Washington University, said observers saw the group pop up in the middle of 2018.

Lewis describes The Base as a “small accelerationist Neo-Nazi movement,” that is mostly active inside the United States and whose “primary goal is to recruit, radicalize, inspire, train others, to commit violence and bringing about a societal collapse.”

It is not surprising that Nazzaro would paint his group with a public facing language of a group of “survivalists,” Lewis says. But charges against members of the group and some of their guilty pleas tell the real story, he says.

“They’ve been involved in alleged plots to commit acts of targeted violence that would and should be called domestic terrorism,” Lewis says.

Geraldine Moriba, also a co-host of the podcast, was similarly blunt. “They are domestic terrorists. They are plotting to create the collapse of America. That’s what they say on almost every single call,” she told CNN.

The Department of Homeland Security and the Department of Justice did not respond to a CNN request for comment about The Base. The FBI declined to comment and referred CNN to criminal charges against alleged members of The Base.

Earlier this year, US federal authorities  arrested a number of suspected neo-Nazis accused of belonging to The Base  out of concern they were planning violence at a gun-rights rally in Richmond.

In his emailed correspondence with CNN, Nazzaro responded: “The Base isn’t responsible for any alleged illegal activity carried out independently by individual members. Any such activity should be considered entirely unsanctioned by the network.”

Nazzaro was extremely involved in the recruitment process for the group, according to the calls.

Posts from The Base on social media and physical flyers would seek recruits, and ask about age and military background, with youth an important factor, Paksima said.

Respondents would send emails and be vetted for a time by Nazzaro.

Those he selected, would then talk in virtual interviews with Base members, often including Nazzaro, according to the SPLC. After that, some would be chosen for in-person meeting.

Eight countries and 26 US states were mentioned in the calls, according to the SPLC. The geographic spread speaks to the aims of The Base, who want many independent cells who don’t know details of each other and their plans in case they are infiltrated or arrested, Moriba said.

And while the cells can be independent, they would be ready to act at the right time, Moriba said. “What they talked about a lot was getting ready for the moment when America collapses and they fill in the vacuum.”

Nearly 20% of the applicants to join The Base claimed to have combat training, according to the SPLC.

They included  purported  active and retired members of US forces, Paksima told CNN: Eight who said they were Army, eight from the National Guard, one a Marine and one a former member of the Air Force.  She said they talked about their experience and training, which appeared valuable to the group.

“They are being recruited for their expertise. They can train other people up,” Paksima said.

In one call, Nazzaro told an applicant the group’s aim.

“We want things to accelerate, we want things to get worse in the United States. And from that point, by virtue of the chaos that ensues, that would naturally present some opportunities for us. Law and order starts breaking down, power vacuums start emerging for those who are organized and ready, to take advantage of those.”

Nazzaro told CNN in an e-mail he was referring to how the “socio-political system of America is irreparably broken.”

“Increasing civil unrest is inevitable,” Nazzaro told CNN in an e-mail. “Our aim is not only to survive this anarchy but thrive in it, and create order out of chaos eventually.”

One of the recorded calls was of a conversation between Nazzaro and an undercover reporter.

“I mean, you’re going to go to the military and from the training that you are planning on getting, that will be very valuable,” Nazzaro told Ryan Thorpe, who in 2019 wrote of the group’s attempt to attract recruits in Winnipeg, Canada.

Thorpe said he first responded to some flyers left around Winnipeg, including around a military base. After some emails, he was asked to download and use the encrypted Wire app for communication, Thorpe wrote.

Gen. Mark Milley, Chairman of the Joint Chiefs of Staff,  was asked by NPR this month about extremism in the military, and replied that it had been monitored closely for years.

“We pay close attention to symbols, tattoos, language, behavior, et cetera, for any member of the US military that displays any sort of extremist behavior,” he said. If instances were found, they were dealt with, Milley said, adding: “I don’t see it as a widespread issue in the military right now.”

Frank Meeink, a former neo-Nazi who went to prison for kidnapping in the 1990s, has long warned of the desires of extremists to connect with the military.

“It’s what we were told by leadership to do,” he told CNN. “To cut our hair, get rid of our Nazi tattoos and try to join law enforcement or the military to get training to help implement our plan,” Meeink said. “It was so we can learn military training so that we can come back and destroy Sodom and Gomorrah — which we considered America.”

The SPLC plans to release more of the information they gleaned from the calls in coming weeks.