Woman gets jail for group attack on gay Philadelphia couple 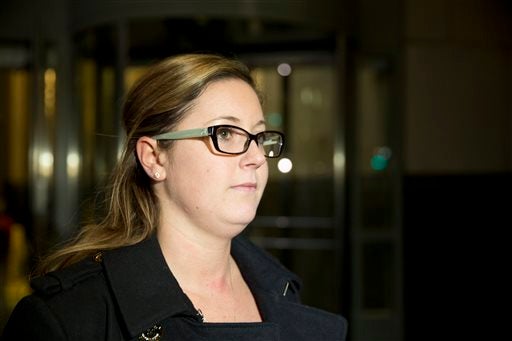 PHILADELPHIA (AP) – A suburban police chief’s daughter began serving five to 10 months in jail on Monday for a group attack on a gay couple that prompted Philadelphia to add sexual orientation to its hate crime laws.

Common Pleas Judge Roxanne Covington questioned how then-hospital worker Kathryn Knott walked away from the victims as one lay badly injured in September 2014.

She also ordered the 25-year-old Knott, whose online posts have insulted gays, non-English speakers, Middle Easterners and hospital patients alike, to get anger management treatment and stay out of Philadelphia during two years of probation.

Trial witnesses said someone in Knott’s group of young adults out on the town shouted a gay slur at the couple, sparking a fight that left one victim with a broken jaw. Knott insisted she moved toward the fight to intervene, but the judge found she threw a punch.

Knott apologized to the victims on Monday, then wept with her parents before guards took her into custody. She said she hoped the case helped educate people, herself included.

The victim who had his jaw broken and his face bashed spoke briefly in court about the trauma of knowing the revelers walked off after the fight without even calling an ambulance.

“This whole group of people left us. … They all looked carefree, buoyant even,” said the man, who does not want his name publicized. “Every single one of that group, including Kathryn Knott, left me in that alleyway to die.”

He and his boyfriend had hoped that all three defendants would take a plea offer, to spare them the ordeal of a trial and more time in the media spotlight.

The two co-defendants agreed to plead guilty in exchange for probation. One, who caused the worst injuries, pleaded guilty to a felony.

Knott’s lawyer had hoped she would be given probation for her lesser role, even though she had rejected a similar plea offer. A jury convicted her of simple assault and three other misdemeanors.

The judge agreed to sentence her below the 9- to 23-month guidelines sought by prosecutors.

Assistant District Attorney Michael Barry said the attack damaged the psyche of a city known for its tolerance, where a popular neighborhood called the Gayborhood boasts restaurants and stores patronized by gays, non-gays and tourists alike.

“We’re not some backwater town,” Barry said. “You’re supposed to be safe.”