Neighbors say dozens of tires slashed in southeast side neighborhood 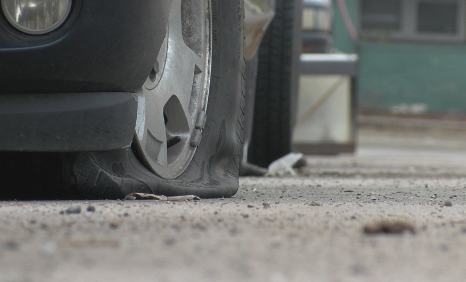 INDIANAPOLIS (WISH) – Dozens of people in one Indianapolis neighborhood woke up to flat tires Saturday morning. Vandals slashed tires on cars parked outside homes near Morris and South East Street.

At least 12 people filed reports with police, but those living in the area say they estimate the total number of cars damaged is closer to 40.

“I tried to pull out and I hear thump, thump, so I pulled over and had two flat tires on the passenger side. Front and back,” said one victim, who asked not to be identified.

She was just one of many who had flat tires on Saturday morning.

“I noticed my neighbors were out and my one neighbor had all four tires flattened. Five Blue Indy cars that they just installed at the end of the street… they got every one of those,” said the victim.

Most of the vandalism happened on Sanders, Orange, and South East Streets. Many people in that area spent their afternoon replacing the damaged tires.

The vandalism also caused a big boom in business for the neighborhood auto shop.

“Today was so busy. Everything back there was full, over here, and then we had cars behind the cars that were already here, so it was pretty crazy,” said Diego Estrada with Daniel’s Auto and Tire.

Estrada said almost every car that came in Saturday had similar damage to the tires.

“They all got like an inch and a half or so cut,” said Estrada.

He said he’s never seen a rash of vandalism like this. Neither have many of the victims.

“I retired. I worked 30 years so that I could have something, for them to tear it up for no reason is ridiculous,” said the victim.

She is hoping IMPD steps up patrols in the neighborhood so something like this doesn’t happen again.

“If they could patrol and show a presence and stop someone else from doing it that would be worth more than them catching the ones who did it last night,” said the victim.

Several people in the neighborhood have cameras outside their home. They are in the process of reviewing that footage to see if it captured images of those responsible.