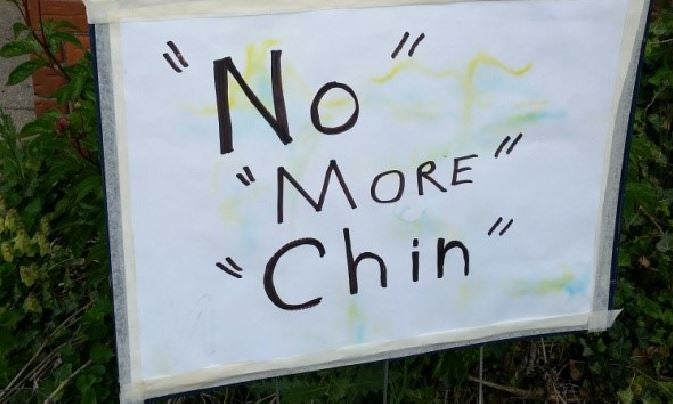 SOUTHPORT, Ind. (WISH) — Homeowners are upset after a sign popped up in a Southport yard racially targeting their immigrant neighbors.

It was in front of a vacant home that’s for sale at 7406 Earl Court. The sign read, “No More Chin,” referencing the Chin community of Burma that lives on the south side.

Since the home is vacant, neighbors aren’t sure who put the sign up. Finding the culprit thought isn’t their priority; they’re making sure the Chin community knows it’s welcome.

“I love my neighborhood. I think that it’s a wonderful place to live. It’s just really sad that this happened,” said Laura Wilkes. She lives next to the home where the sign was placed and was shocked when she saw it.

“It’s a horrible message. They were trying to intimidate a group of people that have done nothing but try to live just like anyone else,” she said.

If intimidation was the sign maker’s goal, it didn’t exactly work.

“I don’t feel anything like that at all. It’s just unhappy neighbor,” said Peter Thawnghmung, a member of the Chin Community of Indiana.

He said the sign bothered him and his people but not enough to make them worried about their safety.

“Most of the people we know are very welcoming, so this does not reflect, in my opinion, what Southport’s all about, Indianapolis is all about, or Indiana is all about on the whole,” he said.

Thawnghmung believes the hateful words stem from what he calls a “cultural integration issue.” He says Chin refugees must learn how to live like Americans but hopes locals know that transition won’t happen overnight.

“It takes time working together to make everybody happy, but we need to be able to live harmoniously as neighbors and peacefully,” he said.

Wilkes believes in that message so much she sent one of her own. She replaced the word “Chin” on the sign so it would read “No More Hate” then added “love your neighbor as yourself.

Unfortunately, someone modified the sign again to show hateful words so it was taken down.

The Fair Housing Center of Central Indiana was notified about the incident.

It handles cases such as a person being discriminated against as they try to buy a home.

“We want to get the word out about fair housing laws, that there is a resource in the community that if an individual feels that they have been targeted in housing related to a protected basis that they do have rights,” said Fair Housing Center of Central Indiana Executive Director Amy Nelson. “I just really want to commend the neighbors because so often these type of things are just left and nobody reports them, nobody does anything about it. One of the best things that’s come out of this is those neighbors said this isn’t going to happen in our community.”

If you are aware of housing discrimination occurring in your community, please report it to info@fhcci.org or 317-644-0673.