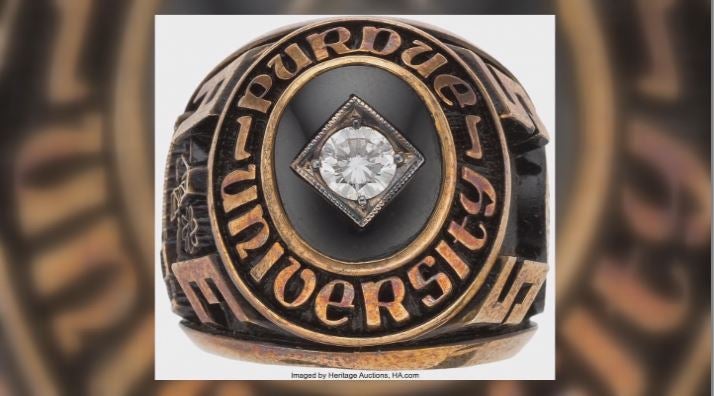 For a number of people, the answer is Neil Armstrong’s 1955 class ring. This is one of the many items you’ll find on the Heritage Auctions website.

Heritage Auctions is the world’s largest collectibles auctioneer. It has brought back part two of its Armstrong memorabilia sale. The company plans to have a third sale in July during Moon Walk Week.

“There’s a number of items relating to his days as a student at Purdue University that is certainly among the neater, more iconic items,” said Executive Vice President of Heritage Auctions Todd Imhof.

Approximately 700 Neil Armstrong items are currently being bid on at all ranges and prices. Heritage Auctions leaders and Armstrong’s sons Mark and Eric have been in close contact leading up to this.

“It’s very important to them that the integrity of their father’s work be presented in just an absolutely impeccable way,” said Imhof.

Orlando Itin, who owns Bruno’s Pizza in West Lafayette, has been collecting Purdue memorabilia for more than 30 years. Although he mainly sticks to sports items, he’s had his eye on a few Armstrong items.

“I’ve looked at a couple of different items in the auction, saw the ring,” said Itin. “There was an award he got from the Grand Prix being the Grand Prix Marshal, I was kind of interested possibly.”

If you happen to bid and not win an item, you may still have a chance to see it one day.

“Eventually all the stuff, if we win Purdue items, I think we’re all going to get back to Purdue,” said Itin. “Someday we’re going to have a nice museum maybe when they redo the football stadium in the south end-zone we may have a little place to put some of our memorabilia.”

The bidding for Neil Armstrong’s items is currently underway on the website. Bidding will close next Thursday, May 9.