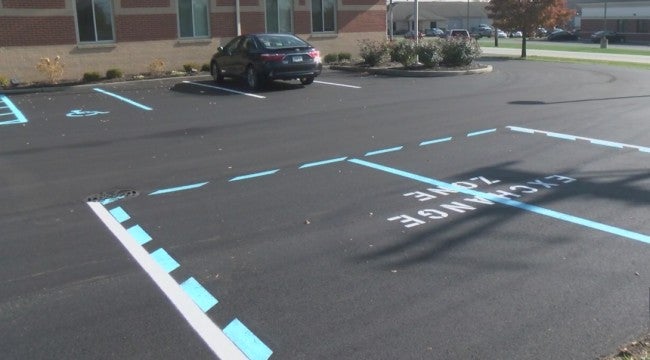 FRANKLIN, Ind. (WISH) – If you need a safe place to meet up with someone for an online transaction, the Franklin Police Department has your back. They say a simple redesign choice is helping the public stay safe during exchanges.

The department is highlighting the safest part of its parking lot to meet someone.

The exchange zone sits at the far end of the police department’s parking lot, because from there, it has the most eyes on it.

“There’s a lot of traffic that comes in and out of the building, especially during the daytime,” Franklin Police Chief Kirby Cochran said. “Normally myself, the deputy chief, and other officers are here in the building, so we can kind of see what’s going on. But the bigger part of that was just being able to have a recording of what activity was going on.”

Even though the exchange zone is considered the safest place, it doesn’t mean crimes can’t happen there. However, police say they’re better prepared to handle incidents in that location, especially because of the camera.

“There’s nothing that says somebody won’t try it here, but I’m assuming it would be less likely,” Chief Cochran said. “And then, of course, we would have a good starting point.”

And that’s especially important when an exchange involves children.

“When you’re talking about children, custody exchanges, it is important to have a good, quiet, positive change for the kid,” Chief Cochran said. “If we can do this and it helps just one transaction or one child have a positive experience, or two parents to know that ‘hey, I’ve got to behave like adults during this exchange,’ then it’s well worth the money and the time.”

The cost was extremely low for the department.

“We were already going to paint the parking lot, we just changed the color to blue,” Chief Cochran said.

Several people have already made good use out of the spots, with the surrounding public seeing the advantages.

“I think it’s a great idea,” Jennifer Hollingshead said. “I think it will keep people safe that want to sell things to other residents, so I think that’s very smart.”

Just because the spots have been painted, doesn’t mean they’re complete. The Franklin Police Department says that among other things, they’re still looking at adding signage in the future.