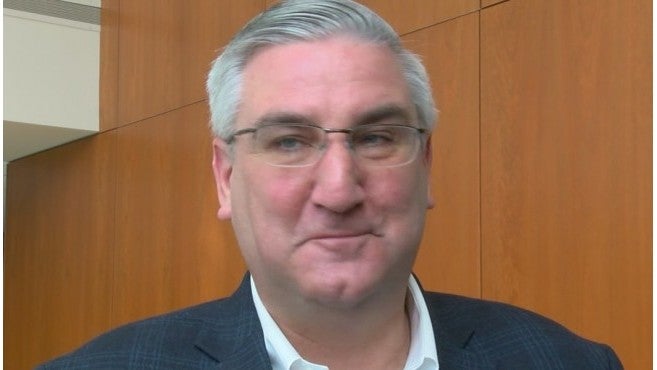 More help is on the way for Hoosiers fighting drug addiction.

Holcomb looked straight into a TV camera during a news conference at Franciscan Health Indianapolis and said, “This is about life-and-death situations.”

The three new laws were designed to usher in resources for addicted Hoosiers. The governor spoke directly to people who are hurting.

“You can get your life back. You can get your family back,” Holcomb said. “There is a bigger family out there. I run into good-hearted folks every single day that have put their interest aside so they can help you.”

“It’s very hard for them,” she said and got teary eyed.

“They’re very scared,” Neu said at the news conference. “They’re frightened of what may happen to them and their family.”

State Rep. Cindy Kirchhofer, a Republican from Beech Grove, said her bill, House Bill 1007, calls in part for adding nine opioid treatment centers statewide in the coming years. The goal is to have centers within an hour’s drive of people who need their services.

Kirchhofer said Friday at the news conference, “I’ve heard of people having to drive from Brookville, Indiana, to Indianapolis and back before 8 a.m., investing two, three, four hours of travel before they even start work. This will get treatment to them. Keep them working.”

State Sen. Jim Merritt, a Republican from Indianapolis, said his bill, Senate Bill 139, requires county coroners to investigate if they suspect someone died of an intentional or accidental overdose of a controlled substance.

Merritt said at the news conference, “Understanding what individuals are dying from, what drugs are in our communities. We know Fentanyl is playing a large role in overdose deaths now.”

State Sen. Erin Houchin, a Republican from Salem, said her bill, Senate Bill 221, requires doctors who want to prescribe opiates, including Oxycodone, to register with the Indiana’s Prescription Drug Monitoring Program called INSPECT. Doctors also will have to search a patient’s prescription history in that database before writing an opiate prescription.

Houchin said at the news conference that the database is “to make sure the patient is not at risk for an overdose, is using their prescriptions appropriately, and is not over-using or doctor-hopping.”

“It’s gonna help us treat our patients and our newborns, some of whom are born with an opiate addiction and have to go through a painful withdrawal treatment process.”

Indiana’s drug czar Jim McClelland discussed the sources of the money for these resources.

“There’s more coming from the federal government now,” McClelland said, “the waiver that we had approved from the Centers for Medicare and Medicaid Policy. That now enables us to use Medicaid and HIP (Healthy Indiana Plan) dollars to pay for residential treatment and recovery support services which basically enable us to use those dollars for a full range of services.”

McClelland said millions of dollars are coming to Indiana. “That money is almost all federal dollars coming in. Plus, the budget that the Congress passed recently has more money in it to tackle the opioid problem. So, there’s more money, there’s a lot more money coming in. We’ll be working on what we might want to bring before the General Assembly in 2019.”

Holcomb officially signed all three bills on March 22. They will take effect July 1.