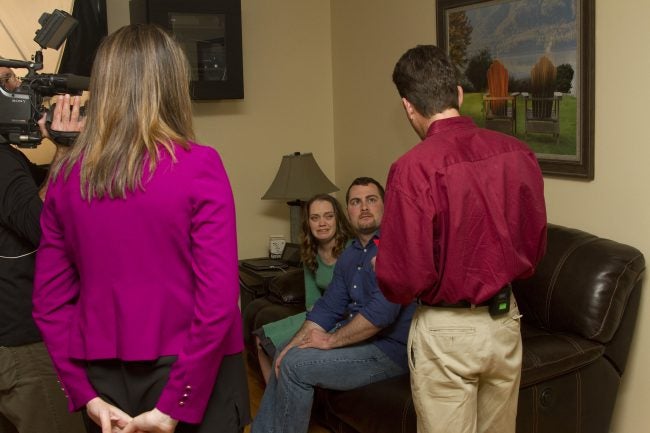 INDIANAPOLIS (WISH) – It is news that would crush some people with its weight and others would crumble. It’s a diagnosis that would forever change Matthew and Kristin Wollak’s life.

As 24-Hour News 8’s Brooke Martin found out through resolve, gumption and grit, the family is not letting it defy them.

Their Hoosier love story was born in West Lafayette.

“It was a bet to be honest with you. We were at a concert at Purdue on campus and we were with a mutual group of friends at a Switchfoot concert,” remembers Matthew.

Matthew’s buddy bet him he couldn’t get a date with any girl he picked out.

“And I said I’ll take a bet and he pointed to her,” said Matthew.

That “her” Matthew is referring to was Kristin Hollingsworth. She was a sophomore majoring in animal biology with a specialty in biotechnology. She was no push over and while it took some convincing, eventually Kristin gave in. What Matthew didn’t know is that the week prior to that concert, Kristin wrote something in a prayer journal. It said the next person she would meet would be the one that she would marry.

It was true. The couple got married in 2010. Both of them landed good jobs and bought a house on the Northwest side of Indianapolis.

Life got a little sweeter in 2016 when they found out Kristin was expecting a baby girl in September.

“We kind of noticed that she had a couple of tingling sensations in her hands, a little bit of slurred speech but nothing significant,” explained Matthew.

The couple says doctors thought at first they were pregnancy symptoms. With that said, the couple didn’t worry.

“Then the balance issues started to come, the speech got a little bit worse and then she actually fell in May,” said Matthew.

They knew something wasn’t right. Doctors thought it might be multiple sclerosis but they couldn’t do some tests because Kristin was pregnant. Her symptoms continued to get worse. On September 13, they welcomed little Kamila Marie into the world. Matthew and Kristin were head over heels in love with their healthy and happy baby girl.

Doctors didn’t waste any time as after Kamila’s birth and they immediately gave Kristin a round of tests. Three days after Kamila was born, doctors had a diagnosis.

“I got a phone call from her dad and he just said, ‘you need to get here now,'” explained Matthew.

Matthew jumped on his motorcycle in the pouring rain as he raced to the hospital.

As Matthew passed through the hospital doors, he recalls a strength that filled him as he held Kristin through the news. Doctors diagnosed Kristin with ALS, also known as Lou Gehrig’s disease. There is no cure, no real treatment. In short, doctors says the body deteriorates while the mind remains clear.

“Your heart drops, you’re 30 years old and you got two to four years [to live] and we got a brand new baby,” explained Matthew.

Five months after the diagnosis, the disease is stealing away Kristin’s abilities. She is unable to rock her baby, sing her to sleep or change her clothes. Kristin, like most mothers, isn’t sad for herself but for her baby girl.

“I didn’t want Kamila to not have a mom,” Matthew said as he translated what Kristin was trying to express.

In the midst of pain, there are friends who are supporting the Wollak’s. One of those friends is Sarah Keigley. She and her husband are good friends with Kristin and Matthew. Through a quick Facebook post to WISH-TV’s page, Sarah shared the Wollak’s story with the WISH Patrol.

“They are just the best people on the planet. Anything we can do to help take the suck away. For something like this to happen to people that you just really love is heartbreaking and I just hope you guys enjoy the day,” explained Keigley about why she nominated the couple.

With a knock on the door, the WISH Patrol sprung into action. With brushes in hand, local makeup artist and image consultant Brandie Price started the makeover. Willyum Baukley from Willyum Photography documented the transformation for a keepsake for the family.

Kristin had the perfect outfit for the night thanks to Matilda Jane. While Ed Stewart from Ed Stewart Photography snapped some pictures, there was another knock at the door.

This time, it was Eric Bayha, the owner of the Good Feet store in Indianapolis. Bayha heard about what the couple was going through and wanted to step in. He donated a $1,000 Amazon gift card to the couple. Why Amazon? The couple frequently orders ingredients for Kristin’s specialized diet through the site.

“I know that you guys enjoy shopping on Amazon, this is from your friends with the Good Feet store. I just want to tell you what a pleasure it is to enjoy this moment with you. Thank you so much for allowing me to do this,” explained Bayha.

After a quick touchup on the makeup and a few pictures in, came another knock at the door.

“Hello, my name is Matt Bauer with Ruth’s Chris Steakhouse here in Indy. I have some flowers for you. We would also like to invite you to dinner at our downtown location. We have a reservation for you tonight,” explained Bauer.

That reservation wasn’t their only invitation. In true Boilermaker spirit, Purdue University wanted to show what being an alumnus means.

The couple were honorary guests at the Boilermaker Ball at the Indianapolis Marriott Downtown in late February. A limo took the family down where they enjoyed a night of dancing and good food. They celebrated life that too often isn’t fair.

The couple often flashes back to the Switchfoot concert where they met. The WISH Patrol reached out to Switchfoot. Jon Foreman, the lead singer for Switchfoot, sent the couple this video.

Matthew, Kristin and Kamila aren’t wasting any of the precious time they have together. Kristin says there’s a good reason for that.

The community is rallying behind the couple. A GoFundMe for the couple is up to $41,000.

24-Hour News 8 would like to thank those who helped make this WISH Patrol happen:

Do you know someone who should be featured in our next WISH Patrol? Click here to fill out the form and nominate them.