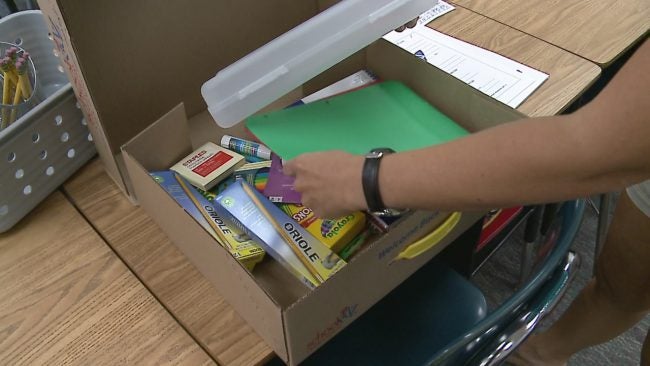 “Just scrambling around with excitement,” said Susan Hillman, a third grade teacher at Lantern Road Elementary School, as she tidied her classroom. “It’s like starting all over every year.”

That couldn’t be more true for her this year. Not only is she at a different school, she’s inside a brand new classroom that’s technically outside the main building.

“It’s nice and peaceful and you can walk outside and get some fresh air if we need to and I think that’s good for the students, too,” Hillman said.

“We’re now at about an average across elementary (schools), 24-25 students going on in a classroom,” said Beverly Redmond, Director of Schools and Community Relations. “Whereas (last year), in some cases we were tipping over into that 30 mark.”

Hillman’s class will have 22 students. Her portable classroom unit is shared in a trailer with three more, creating what the district calls a “quad.”

“This is probably the smallest class size I’ve had in maybe 15 years or more. So I think it’s overall just a better deal for parents and students and teachers as well.”

Parents like Matt Brown agreed with Hillman.  “I think it’s fantastic because it was allows for a little more one on one instruction,” he said.

Brown’s son Zachary was in a portable classroom last year at Hoosier Road Elementary. The school has four of them. Other than not having its own bathroom, they didn’t notice much of a difference between regular classrooms.

“The teachers do a great job of making sure the classrooms are exactly the way they would be in the building,” Brown said. “But we get to be outside a lot more,” Zachary said with a smile.

HSE now has a total of 37 portable classrooms. Most of them are used for third and fourth grade classes, some of which have been around for several years.

When asked if some of the portable classrooms could become permanent, Redmond said the school board is working on a plan for what to do next.

Redmond added that the money collected from the referendum will continue to go towards hiring teachers and making sure the students are “globally competitive.”

The district also added more assistant principals so that every kindergarten through fourth grade school would have one.