New York cop joins kids in a game of football 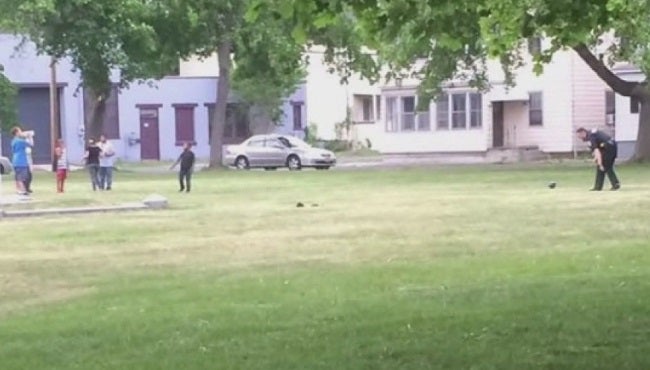 WATERVLIET, New York (NEWS10) – It’s a scene in a New York park that’s putting a smile on the faces of residents in the community.

Peyton Peterson, 10, was playing football with his friends in Watervliet after school on Monday. His mother, Stacy Rundle, was watching. But then a police officer showed up.

But when Officer Chris Toleman got out of his car, he did something unexpected.

“He just picked up the football, and I didn’t know what to do,” Peyton said. “I thought we all got in trouble at first.”

Instead, he joined the game.

“We were just playing,” Peyton said.

Officer Toleman joined the kids for about 45 minutes.

“And he was like, ‘That was awesome! I should have had my phone out to take a picture!’” Rundle said of Peyton’s reaction. “He talked about it all night.”

“I just wanted to put it out there that there are good cops out there,” she said. “There are people that are doing their job.”

Officer Toleman is away at police training, but Watervliet Police Chief Ron Boisvert said his actions on Monday are typical for the officer, WISH-TV’s sister station NEWS10 reports.

“He’s still learning his way around here, and I think that’s one of the things that’s nice is that he’s willing to get out, to interact, and make kids feel a little more comfortable being in a police presence,” he said.

That mission was accomplished.

“We were just talking about how cool it was,” Peyton said. “Felt like he cared about us.”

Officer Toleman has been a member of the Watervliet Police Department for two years, but Peyton’s dad said he’s already making a good name for himself.