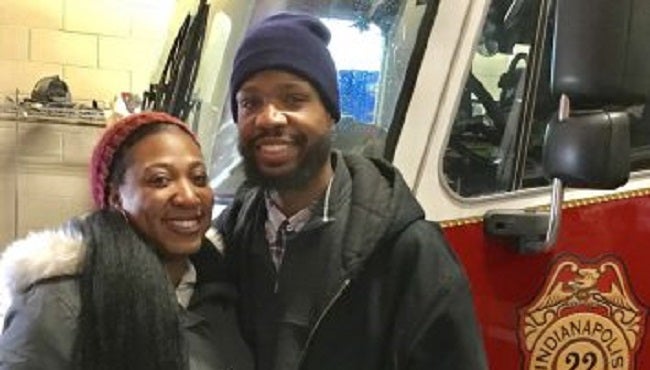 INDIANAPOLIS (WISH) — A CPR class taken by an Indianapolis woman six years ago helped saved the life of her new husband when he went into sudden cardiac arrest, according to Indianapolis Fire Department emergency responders.

“I thought he was just having a bad dream, a nightmare, but I knew something wasn’t right. He wasn’t responding to me,” Chyna recalled. “And so, in that moment, I turned on the light to just witness him with his eyes rolling into the back of his head.”

It was 5:30 a.m. Dec. 14. Robert wasn’t breathing and had no pulse. Chyna rushed to call 911 and suddenly remembered a CPR class she took for a job application years ago.

“In that moment, you know, you really don’t know what type of or how much strength you really have,” she said, “because I thank God just for putting it in me to act in that way because I hadn’t taken a CPR class in five, six years.”

With the emergency dispatcher on speakerphone, Chyna administered CPR for the four most valuable minutes of cardiac arrest — the first four — and prevented permanent brain damage to her young husband.

“I didn’t feel like he was gone. I knew that he’s going to be OK,” she said, remembering when Indianapolis fire emergency response teams arrived and took over CPR. They hooked Robert up to heart monitors and continued CPR for the recommended 30 minutes.

“At that point in time, we’ll terminate our efforts,” said Capt. Jeff Quinn with IFD EMS Operations. “If they’re in certain other [heart] rhythms, then we can elect to work a little bit longer.”

“They said he hadn’t been resuscitated. There was no heartbeat, and so I begged her with everything, I said please just keep doing what you’re doing,” Chyna said. “It was within that two minutes at least, that’s when they came back and said they got a pulse and they were on the way to the hospital. And I couldn’t tell you the relief that I had at that moment.”

“I went to work the night before, felt fine at work, came home. We talked like we normally do, and then I went to sleep,” said Robert, who has fully recovered from his ordeal. “And then just to take up like that, and her seeing me like that. I’m just grateful for live every day now. I truly am.”

Robert spent 2-1/2 days in a coma and in six days was back in his home, just in time for Christmas, with no physical or mental disabilities.

“I feel like I owe them my life. I feel like without them I wouldn’t be here today. And if it wasn’t for that EMS to make that call and go above 30 minutes, that made all the difference.That’s the reason I’m here today. I’m forever grateful to them,” Robert said.

Quinn, the fire department captain, said, “I think everyone should know CPR. Period. It’s a very easy class to take. It takes just a couple hours to learn and obviously it saves lives.”

If you’re interested in taking a CPR or First Aid course, here are some places they are available: American Red Cross, RESQ Health and Safety Training, SMRT Indiana, CityWideCPR (Carmel), At Your School (AYS) CPR and American Heart Association.