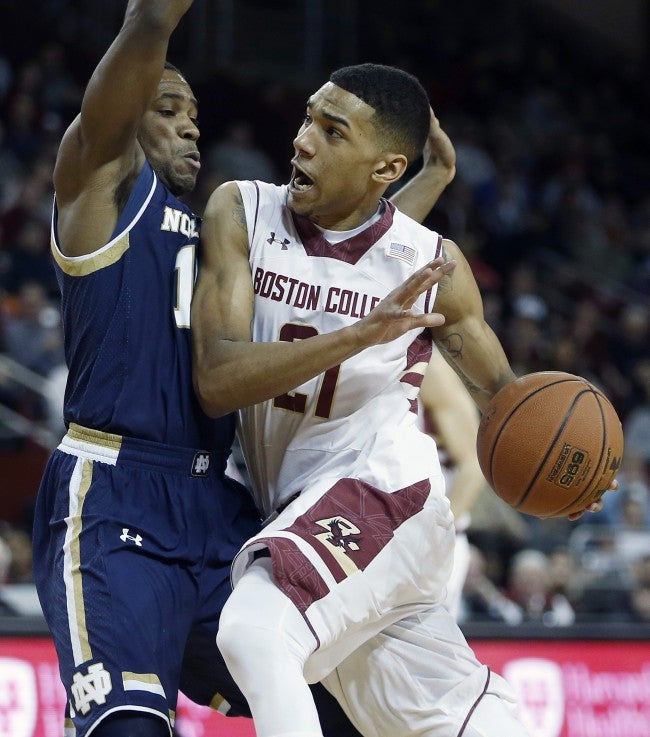 BOSTON (AP) – Notre Dame coach Mike Brey jokes that he has mixed feelings about Pat Connaughton sticking around through the end of the season.

The 6-foot-5 forward is also a right-handed pitcher and a fourth-round draft pick of the Baltimore Orioles, who reported for spring training on Friday. But Connaughton isn’t going anywhere – not with the 10th-ranked Irish off to their best start in more than 40 years.

“I’m an Orioles fan. So I’m going, ‘What are you doing here?’ I don’t want to lose a heck of a pitcher,” Brey said after the Irish beat Boston College 87-70 on Saturday. “He is an amazingly gifted athlete. He’s just a winner, (with) everything he is around.”

Bonzie Colson came off the bench to score 16 points with six rebounds in 15 minutes for Notre Dame (24-4, 12-3 Atlantic Coast Conference). Demetrius Jackson added 15 and Jerian Grant had 10 points and 11 assists for the Irish, who shot 75 in the second half and 66 percent for the game.

Connaughton, who was recovering from a virus, spent last July with the Single-A Frederick Keys, going 0-1 with a 2.45 ERA before returning to Notre Dame for his senior year. With Boston Celtics general manager – and former Toronto Blue Jays second baseman – Danny Ainge sitting courtside on Saturday, he scored eight points on Saturday and was the only Irish player to shoot less than 50 percent.

“I think the Celtics like him,” Brey said. “I heard Danny likes him because he’s a basketball-baseball guy like Danny.”

Connaughton, who is from the Boston suburb of Arlington, said he is focusing on basketball through the end of the season before exploring his options.

“I’m not immediately switching over to the Orioles” when the college season is over, he said. “After this, we’re going to see how far basketball goes.”

Notre Dame led 26-25 with 5 minutes left in the first half when Colson scored eight points in an 11-3 run that gave the Irish a nine-point lead. Notre Dame went on a 9-3 run early in the second to open a double-digit lead.

The Irish, who entered the day second in the nation with a 50.8 field goal percentage, shot 58.6 percent in the first half and made 14 of their first 16 shots in the second. In all, they made 35 of 53 shots.

“It’s hard not to be impressed with what they can do on offense,” BC coach Jim Christian said. “They made us pay, if we made any mistake.”

Hanlan had scored 30 or more points in three of the previous four games. Keeping him under control was a key for the Irish.

“When he gets 30, the games are interesting, and BC’s in them,” Brey said. “I thought Demetrius Jackson was really good on defense, especially in the second half.”

Notre Dame: The Irish are the only team in the AP Top 25 that was unranked in the preseason poll. … Brey is 7-1 against Boston College. The Irish are 15-10 against BC overall, winning nine of the last 10. …Notre Dame’s six road conference wins are the most in school history.

Boston College: Will Magarity missed his fourth game out of the last five with the lingering effects of a concussion. … Dennis Clifford had 17 points and six rebounds.

Boston College is at Pittsburgh on Tuesday.