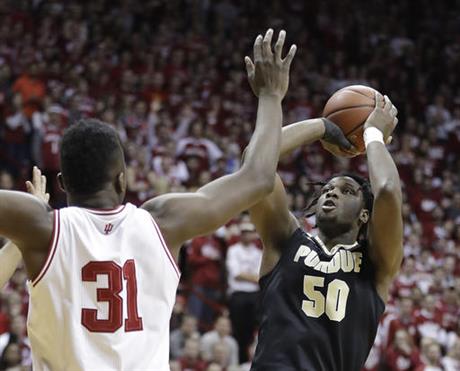 The Boilermakers (20-5, 9-3 Big Ten) have won three straight and six of seven to move into second place in the conference.

Thomas Bryant scored 23 points and James Blackmon Jr. added 11 in his return from a lower left leg injury. It still wasn’t enough for Indiana (15-10, 5-7), which has lost two in a row and four of five.

Indiana led 57-55 after Josh Newkirk’s 3-pointer with 4:56 to go, but the Boilermakers scored seven straight and then made it 64-59 when Swanigan completed a three-point play with 1:02 left.

Purdue sealed it from the free throw line. It has won four of the last five in this series – though this one came with a bizarre sequence that began with a blocking call on Swanigan with 44.5 seconds left. After conferring, the refs called a double foul, causing Bryant and Swanigan to foul out on the same play.

It was that kind of night in the state’s biggest rivalry.

Edwards scored 15 points in the first half that was every bit as back-and-forth as the second.

Purdue jumped to a 21-15 lead about 10 minutes into the game, but the Hoosiers charged back with a 9-0 run to take a 30-26 lead and closed the half on a 6-2 flurry to make it 36-32. Indiana stayed in front most of the second half – until the Boilermakers’ late charge.

Indiana: Even Blackmon’s return wasn’t enough Thursday. The defending Big Ten champs are two games under .500 in league play and have to do a lot of work over the next month if they’re going to make the NCAA Tournament.