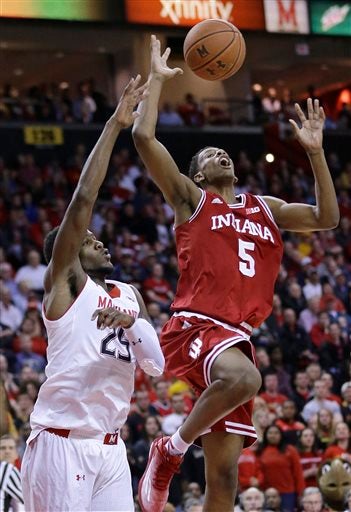 The Terrapins (20-5, 8-4 Big Ten) trailed 61-59 before Wells tied it with a shot in the lane. After Collin Hartman missed a layup on the other end, Jake Layman scored inside with 1:02 remaining to put Maryland ahead for good.

Kevin “Yogi” Ferrell then missed a jumper for the Hoosiers, got his own rebound and missed again as the buzzer sounded.

Coming off a 16-point defeat at Iowa, Maryland improved to 5-0 following a loss.

Indiana won the first game between the teams by shooting 60 percent and making 15 3-pointers in an 89-70 rout. In this one, the Hoosiers shot 37.3 percent and went 10 for 25 from long range.

Ferrell scored 23 points for the Hoosiers (17-8, 7-5). In the earlier game against Maryland, the junior guard made eight 3-pointers. In this one, he went 6 for 9 from beyond the arc.

The Hoosiers have dropped four straight on the road.

Wells put the Terrapins ahead 52-51 by making a free throw with 5:55 remaining. He missed the second, but Layman got the rebound to set up a 3-pointer in the corner by Jared Nickens. Then, after an Indiana miss, Wells made a driving layup to make it 57-51.

But in this game, no lead was safe.

Ferrell scored 13 points in a first half that featured 12 lead changes and ended with Maryland in front 35-34.

The Terrapins led 30-25 before Ferrell scored from beyond the arc, then connected again from long range while being fouled. He completed the four-point play.

Twice earlier, Ferrell hit 3-pointers from well behind the circle as the shot clock was about to expire.