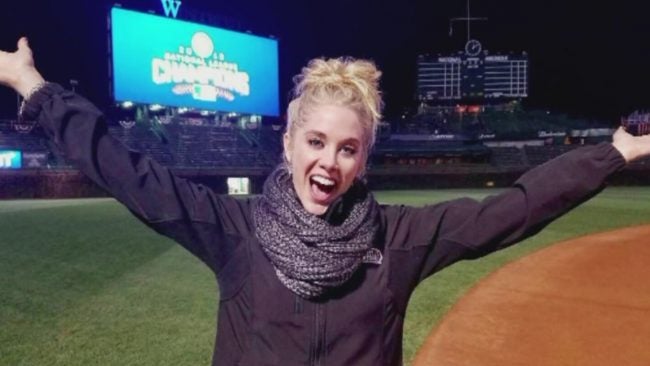 CHICAGO (WISH) — Meet Kelly Crull. A Noblesville native who wrapped up the season of a lifetime last November.

“It’s hard to put into words what that 2016 run was like. But it was absolutely amazing. And to steal a line from Joe Maddon, it was beautiful,” said Crull.

“I’m getting to be a part of history and no one can ever take this away from me.”

Can you imagine having a front row seat to that Chicago Cubs World Series run? Crull has spent the last three years working in the Windy City as the Cubs beat reporter for Comcast SportsNet Chicago. But believe it or not, her broadcasting journey began straight up I-65 in West Lafayette.

“It was the perfect first position for me there, with Purdue in their backyard,” said Crull.

After making stops with the Oklahoma City Thunder and San Diego Padres, Kelly landed in Chicago. Little did she know the journey that the “lovable losers” would take her on last season.

She’s been to a lot of ball parks covering Major League Baseball throughout her career, but Crull says that nothing compares to Wrigley Field, and nothing will ever compare to that 2016 World Series championship run by the Cubs.

“What could be better? What more could be a pinnacle, the top of the mountain than covering a World Series?” said Crull.

Talk about a dream! An MLB postseason stretch is not for the faint of heart. From game one of the division series to game seven of the World Series- Kelly worked 36 straight days.

“You felt like they were destined the way things were happening,” said Crull.

And when you win the World Series for the first time in 108 years, you have to throw the most epic parade possible. And Crull rode through the streets of Chicago with the team.

“We were all taken aback. I just don’t think you can imagine, five million people are what they were say in that area,” said Crull. “You can’t see where the bodies stop, all the way into basically what looks like Lake Michigan.”

The party didn’t stop there. How about joining the squad on a trip to the White House to meet former President Obama?

“I don’t think there was ever a day where I thought covering a sports team would take me to the White House. That was never something I thought would happen,” said Crull.

The Cubs winning the World Series put those lovable losers back on the map in historic fashion.

Sports once again bringing folks together, one World Series at a time.