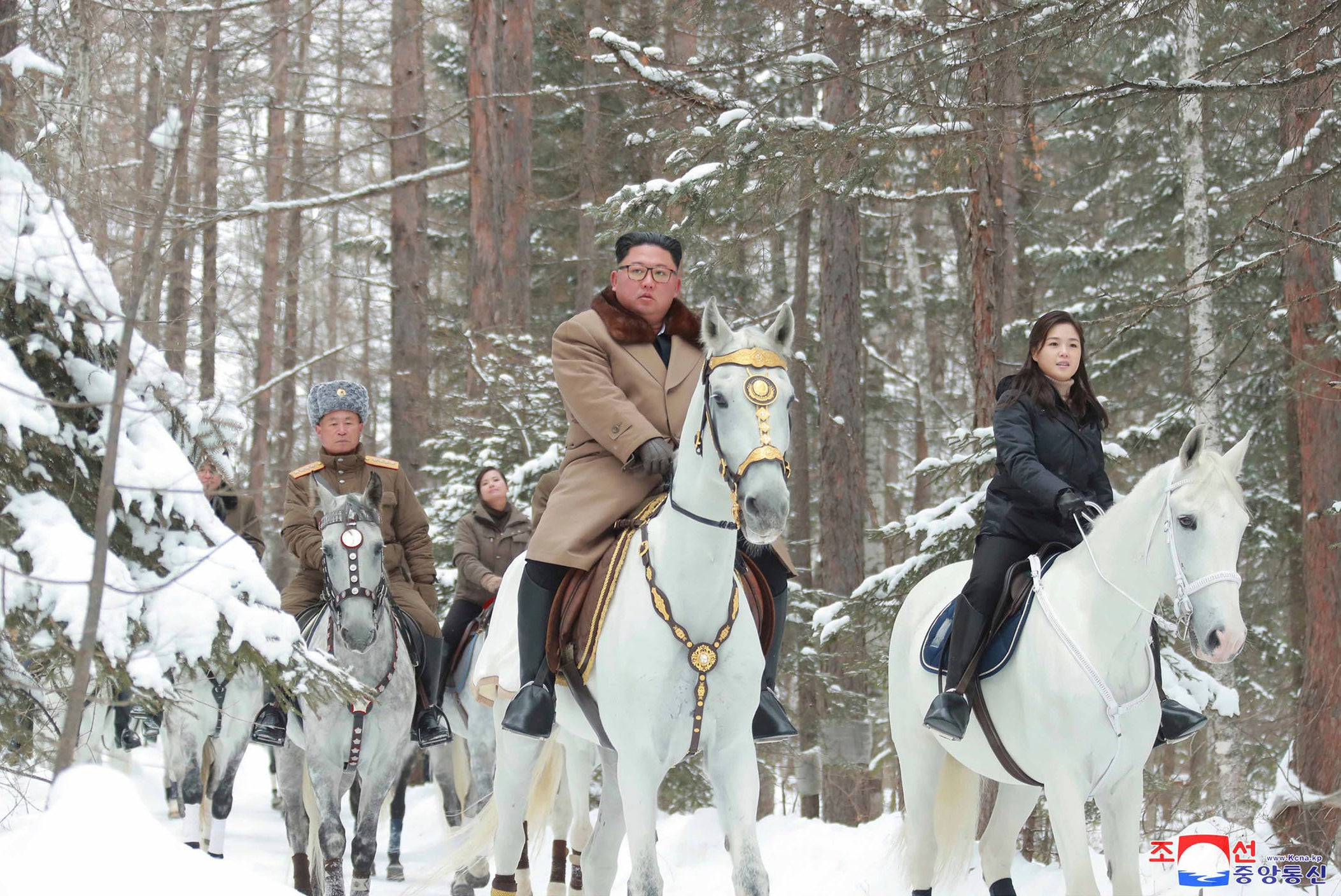 SEOUL, South Korea (AP) — North Korean leader Kim Jong Un accused the Trump administration of dragging its feet in nuclear negotiations and warned that his country will soon show a new strategic weapon to the world as it bolsters its nuclear deterrent in the face of “gangster-like” U.S. pressure.

In a key ruling party conference, Kim also threatened “shocking” action and said North Korea would no longer be obligated to maintain a self-imposed suspension on the testing of nuclear weapons and intercontinental ballistic missiles, which President Donald Trump has touted as a major diplomatic accomplishment. But Kim gave no clear indication that the restarting of such tests was imminent and seemed to leave the door open for eventual negotiations.

Kim’s comments during a four-day plenary meeting of the Workers’ Party’s Central Committee, which were published by state media on Wednesday, come as talks falter between Washington and Pyongyang over disagreements involving disarmament steps and the removal of sanctions imposed on North Korea.

The prolonged standstill has dimmed hopes for achieving a full and verifiable denuclearization of the country through diplomacy. Kim during the party meeting declared that the North will never give up its security for economic benefits in the face of what he described as increasing U.S. hostility and nuclear threats, the Korean Central News Agency said.

“(Kim) said that we will never allow the impudent U.S. to abuse the DPRK-U.S. dialogue for meeting its sordid aim but will shift to a shocking actual action to make it pay for the pains sustained by our people so far and for the development so far restrained,” the agency said, referring to the North by its formal name, the Democratic People’s Republic of Korea.

Kim added that “if the U.S. persists in its hostile policy toward the DPRK, there will never be the denuclearization on the Korean Peninsula and the DPRK will steadily develop necessary and prerequisite strategic weapons for the security of the state until the U.S. rolls back its hostile policy,” KCNA said.

“(Kim) confirmed that the world will witness a new strategic weapon to be possessed by the DPRK in the near future, declaring that we cannot give up the security of our future just for the visible economic results and happiness and comfort in reality now that hostile acts and nuclear threat against us are increasing,” the report said.

In an interview with CBS News, U.S. Secretary of State Mike Pompeo said it would be “deeply disappointing” if Kim reneges on his commitment to pause nuclear and long-range missile tests.

“He made those commitments to President Trump in exchange for President Trump agreeing not to conduct large-scale military exercises,” Pompeo said. “We’ve lived up to our commitments. We continue to hold out hope that he’ll live up to his as well.”

When asked about his diplomacy with North Korea as he walked into a New Year’s party Tuesday night, Trump urged Kim to stick to his alleged commitment to denuclearize. The leaders after their first summit in Singapore in June 2018 issued a vague aspirational goal on a nuclear-free Korean Peninsula without when and how it would occur.

North Korea for decades has been pushing a concept of denuclearization that bears no resemblance to the American definition, with Pyongyang vowing to pursue nuclear development until the United States removes its troops and the nuclear umbrella defending South Korea and Japan.

The North Korean report was vague about the new strategic weapon the country would reveal soon. It had announced in December that it performed two “crucial” tests at its long-range rocket launch site that would further strengthen its nuclear deterrent, prompting speculation it was developing a new ICBM or planning a satellite launch that could help advance its missile technologies.

North Korea has held to its self-imposed moratorium on nuclear and ICBM testing since 2018, though last year it ended a 17-month pause in ballistic activity by testing a slew of solid-fuel, weapons that potentially expanded its capabilities to strike targets in South Korea and Japan, including U.S. military bases there.

While Kim in his remarks at the party meeting gave no clear indication he was abandoning negotiations with the United States entirely or restarting the suspended tests, he said North Korea’s efforts to bolster its deterrent will be “properly coordinated” depending on future U.S. attitudes. He warned that the more Washington stalls “the more helpless it will find itself before the might of the Democratic People’s Republic of Korea getting stronger beyond prediction.”

Some experts say North Korea, which has always been sensitive about electoral changes in U.S. government, will avoid serious negotiations in the coming months as it watches how Trump’s impending impeachment trial over his dealings with Ukraine affects U.S. presidential elections in November.

Kim did warn there were no longer grounds for the North to be “unilaterally bound” to its moratorium on nuclear and ICBM tests, criticizing the United States for expanding sanctions, continuing military exercises with South Korea and providing the South with advanced weaponry.

The allies have scaled down their major military exercises since 2018 to create space for diplomacy, but North Korea considers such drills to be rehearsals for an invasion and insists even the smaller drills violate agreements between the leaders. The North has also criticized the allies over South Korea’s recent acquisition of advanced U.S. F-35 fighter jets.

Kim and Trump have met three times since June 2018, but the nuclear negotiations have faltered since the collapse of their second summit last February, when the Americans rejected North Korean demands for broad sanctions relief in exchange for a partial surrender of its nuclear capabilities.

The KCNA report came hours before North Korean state TV had been expected to broadcast Kim’s New Year’s speech, which he has annually used to announce major changes in security and economic policies. But the absence of a speech in a morning broadcast indicated it was replaced with the lengthy report on Kim’s comments from the Workers’ Party meeting that concluded Tuesday.

In his New Year’s speech for 2019, Kim said he would seek a “new way” if Washington persists with sanctions and pressure. Following the collapse of the Hanoi summit, Kim demanded that Washington come up with new proposals by the end of 2019 to salvage the negotiations.

The Trump administration, which sees economic pressure as its main leverage with Pyongyang, rejected Kim’s end-of-year deadline and urged the North to return to negotiations.

Kim’s comments indicated the North’s “new way” may look very much like the old one — a determination to wait out sanctions and pressure, which will possibly weaken over time, while patiently cementing the country’s status as a nuclear weapons state.

Kim called for his people to stay resilient in a struggle for economic “self-reliance,” doubling down on previous government claims that the North could succeed in domestically driven development despite the punitive measures and restrictions imposed on its broken economy.

But Kim also lamented unmet goals in development objectives laid out in 2019, calling for significant improvements in agricultural production and removal of unspecified “evil practices and stagnation” across industries including coal mining, electricity production, machinery and railway transport.

Kim said if the North does not “spur to the struggle for bolstering the power for self-development while waiting for the lift of sanctions, the enemies’ reactionary offensive will get fiercer to check our advance,” KCNA said.