North Korean missile test may have been big step forward 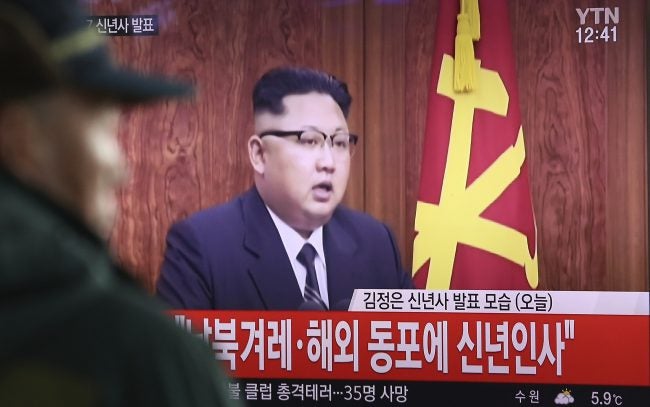 If true, it would be a big step forward in North Korea’s quest to boost its ability to attack the United States and its close allies, South Korea and Japan. Instead of relying on missiles that have to be fueled on a fixed launch pad, North Korea’s military could drive the new missiles anywhere and fire them at will from mobile launchers.

Here’s a look at Sunday’s launch and what it means for security on an already tense Korean Peninsula.

The fuel in solid-fuel rockets is already loaded inside, which can shorten launch preparation times, increase the weapon’s mobility and make it harder for outsiders to detect what’s happening before liftoff.

Most of North Korea’s missiles currently use liquid propellant, which usually needs to be added on a launch pad before the weapon is fired. The rockets North Korea has used for satellite launches in recent years, which were condemned by the U.N. as tests of banned long-range missile technology, relied on liquid fuel.

“Liquid fuel is like a technology from the 1960s and ’70s, while solid fuel is a modern fuel for missiles,” said Lee Choon Geun, an analyst from South Korea’s state-funded Science and Technology Policy Institute. “That’s why we think their latest launch (with solid fuel) is a serious development.”

This latest test is important because, if confirmed, North Korea would have a missile that could be launched anywhere from a ground-based mobile vehicle. While submarines are also a stealthy way to do that, North Korea doesn’t have enough of them. There are doubts that the KN-02 missile, whose range is about 120 kilometers (75 miles), can carry nuclear warheads.

North Korea’s claim couldn’t be independently confirmed, but Lee said video and photos of the launch appear to show that the missile used solid fuel. A South Korean defense official, who spoke on condition of anonymity because of department rules, also said that U.S. and South Korean military surveillance equipment showed it probably used solid fuel.

North Korean state media said the missile launched Sunday was a surface-to-surface “Pukguksong-2” that can carry nuclear warheads. It is likely to be an upgraded version of the submarine-launched missile named “Pukguksong” launched in August.

South Korea’s military said the latest missile flew about 500 kilometers (310 miles) before dropping into international waters between the Korean Peninsula and Japan. North Korea said the missile made a high-altitude flight because of security worries in neighboring countries.

If the missile was fired at a normal angle, it could have flown farther. Some analysts say its maximum range could be up to 3,000 kilometers (1,870 miles), while others put it at 1,200 kilometers (750 miles).

Either way, the missile could target South Korea and Japan, where about 80,000 U.S. troops are stationed.

North Korea’s ultimate goal is a nuclear-tipped long-range missile that can attack the U.S. mainland.

In his New Year’s address, Kim Jong Un said North Korea had reached the final stages of preparations to test an intercontinental ballistic missile. It’s not clear when that might happen.

Analysts say Sunday’s missile test isn’t directly linked to ICBM test preparations. Still, some say North Korea may have used the launch to test some technology it will need for an ICBM.

Last year, North Korea conducted its fourth and fifth atomic bomb tests and claimed a series of technical breakthroughs in its push for a long-range nuclear missile.

But foreign analysts say North Korea has yet to develop warheads small enough to be loaded on a long-range missile designed to hit targets like the U.S. mainland. South Korean officials also believe North Korea hasn’t yet developed a re-entry vehicle for a missile – something that’s needed to return a warhead to the atmosphere from space so it can hit its intended target.

North Korea may have fired the missile to celebrate the Feb. 16 birthday of Kim’s late dictator father, Kim Jong Il. Or it could be trying to see how the Trump administration will react. Or it may just be a regularly scheduled missile test under a broader timetable for weapons development.

The test could also be an attempt to bolster internal unity in a way that doesn’t provoke the United States too much, as a long-range missile or nuclear test would do, said Lee Illwoo, a Seoul-based commentator on military issues.

The United States, Japan and South Korea have requested urgent diplomatic talks Monday at the United Nations, which prohibits North Korea from engaging in any ballistic missile activities.

But it’s unlikely that the meeting will lead to any serious punishment for North Korea, which is already under a slew of U.N. and other international sanctions.