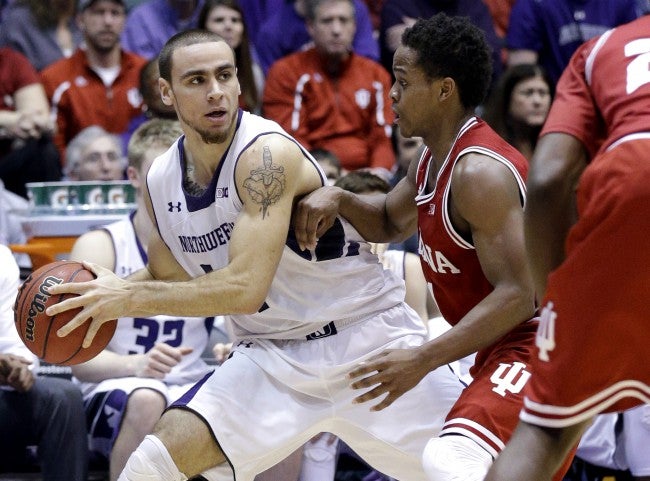 Alex Olah had 17 points and 11 rebounds while Vic Law added 14 points as the Wildcats (14-14, 5-10 Big Ten) extended a winning streak to four and beat the Hoosiers for the third straight time over two seasons.

Troy Williams collected 21 points and 14 rebounds, Nick Zeisloft had 12 points, while Robert Johnson and Kevin (Yogi) Ferrell had 11 apiece for Indiana (19-10, 9-7), which has lost two of three and three of its last five.

Indiana missed 10 straight shots in the same span until Williams’ fast break layup with 3:17 to play.

After trailing by as many as 14 points the Hoosiers crept to within five points with 17 seconds left but got no closer.

Indiana was 9-for-14 on first half 3-point shots as the teams played to a 40-40 halftime deadlock.

Zeisloft hit 4-for-5 from beyond the arc for a game-high 12 points. Northwestern mixed inside and outside shooting and shot 51.7 percent (15-for-29) for first half. Law had 11 points- including two 3-pointers – while Olah worked inside for 10 points.

Olah also had a block midway through the first half, giving him a school record 137.

Demps scored nine unanswered points in a span of 3:35 in the second half as Northwestern opened a 58-48 advantage with 9:27 showing, the largest lead by either team to that point.

Indiana: Junior guard Yogi Ferrell is among 17 finalists for the 2015 Bob Cousy Collegiate Point Guard of the year and hit three 3-point shots to extend his streak of hitting at least one 3-pointer to 58 games, the longest active streak in the nation.

Indiana entered Wednesday ranked third nationally in 3-point percentage (41.2 percent) and ninth in 3-point field goals made (9.2 per game). The Hoosiers set a school and Big Ten record by hitting 18-of-32 on Feb. 15 against Minnesota.

Northwestern is at Illinois on Feb. 28, hosts Michigan on March 3. Florida’s falling lizards are getting used to cold winter temperatures