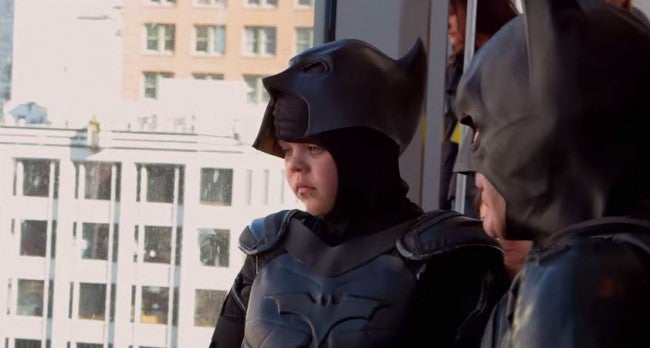 LOS ANGELES (KRON) – Warner Bros. Pictures has released the official trailer for “Batkid Begins,” the film based on the wish of 5-year-old Miles Scott, who is recovering from leukemia.

Through the Make-A-Wish-Foundation, Scott got to live out his dream of becoming Batman for the day.

On Nov. 15, 2013, more than 25,000 people joined in to help fulfill the little boy’s wish. Along with people in the city, another 2 billion people followed his day online.

According to the official release, audiences get to follow as Patricia Wilson, the executive director of the San Francisco Make-A-Wish chapter and her team, make sure that everything goes according to plan to make sure that Scott got the day of his dreams.

Before BatKid, the largest crowd that Wilson had organized was 300. When she posted a RSVP on her website, 7,000 people signed up to be there for the big event. As the days go on, more people sign up by the thousands.

The film looks at why Scott’s story touched so many lives.

According to the film’s official release, “In the end, the film leaves audiences to decide; did Miles need the world for inspiration? Or did the world need Miles?”

Click here to visit the Batkid Begins website. The film will be in select theaters starting June 26.