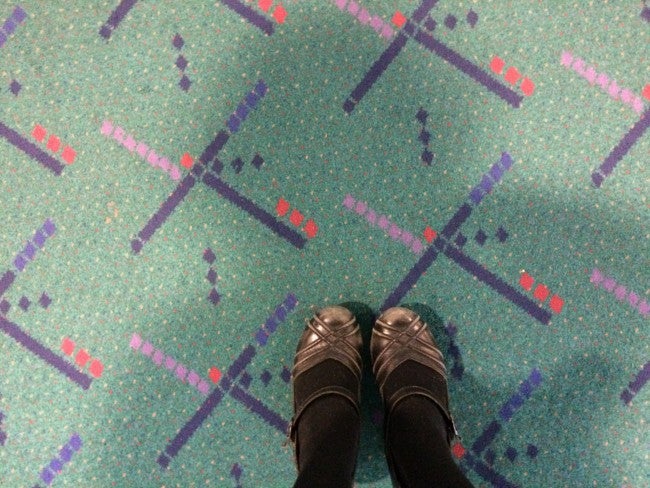 SALEM, Ore. (AP) – Visitors and locals lined up inside Portland International Airport to have their photos taken with an odd celebrity – a piece of nearly 30-year-old carpet.

By day’s end, more than 800 photo booth-style pictures were snapped of people standing next to the segment of floor covering, hung up for an event called PDX Carpet Fest.

It was classic Portland, a city known for keeping it weird: a farewell party for the airport’s trademark teal carpet, which is being replaced after three decades under travelers and luggage wheels.

“I guess this carpet is really iconic, and I can’t imagine another city getting this worked up over carpet,” said Sierra Prior, a Portland resident who posed for photos before boarding her plane to New Orleans.

The unmistakably ’80s carpet at the airport known as PDX is decorated with dark-blue lines and red, lavender and purple dots – a design meant to symbolize air traffic controllers’ view at night.

As word spread that it would be torn up, the weathered floor covering became an online superstar.

More than 40,000 “foot selfies” – photos people took of their feet on the carpet – were plastered on Instagram. The carpet got its own Facebook and Twitter pages.

“I’m getting married on November 6th, and I think I’m going to have all my groomsmen wear the PDX carpet socks,” said Derek Harguth, a Portland native who went to the airport to check out the PDX Carpet Fest.

Demand for actual remnants of the carpet has been so high that airport officials are giving four local vendors 1,000 square yards each to incorporate into items – including sofas, doormats and cat beds – that will be sold to the public.

One of the vendors, Carpet Mill Outlet, got a request from a fan who recently proposed on the carpet and wants to use a strip to make a runner for the wedding.

The floor covering largely flew under the radar until officials last year started putting down large swatches of a new carpet design to test it out. Some locals then realized how much the old carpet meant to them as a symbol of returning home.

“I think people privately held this affection for the carpet until it started to pop up on social media,” said Julie Sabatier, host and creator of the Portland-based independent podcast Rendered. “And at that point, people started to realize they were not alone and started to display this love for the carpet on Instagram.”

Airport spokesman Steve Johnson said PDX officials determined the carpet was too worn for continued use in 2006 and started making plans to replace it.

“By the time we really realized the appreciation for the carpet, we were already well into the process of getting the new carpeting,” Johnson said. “It was really a little bit of a surprise to us how much the community loved the PDX carpet.”

The new carpet isn’t drastically different from the old floor covering. It has markings in yellow, red and blue on a green background.

Installation is expected to be complete by the end of the year. But the old carpet will live on – in foot-selfies, on keepsakes and in Oregonians’ hearts.