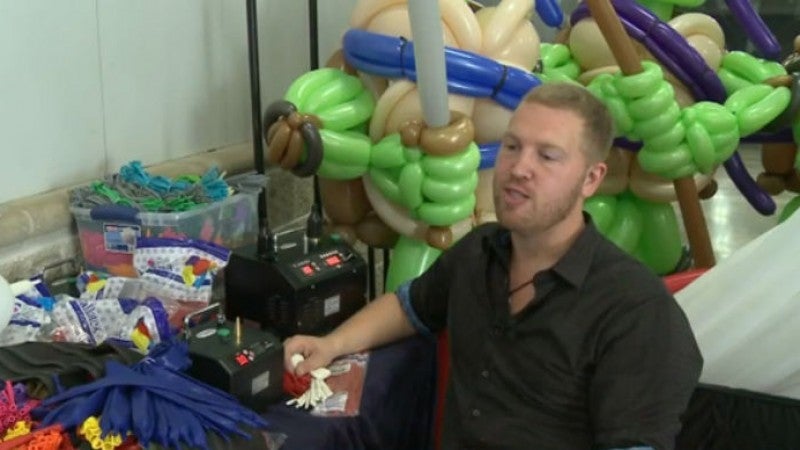 He was talking to a rising kindergartner, the youngest of three kids at the Bell County Expo Center with their father Thursday to pick up their tickets to the weekend’s Bell County Comic Con.

Maue took a break from building the massive Captain America-themed balloon arch he was working on to twist brown and blue balloons into a dog wearing a police uniform from the popular kids’ show PAW Patrol.

After drawing on eyes and whiskers, he handed the complicated design to the child. “That’ll be $100,” he joked. The child beamed as he took the creation.

Making balloons for kids was Maue’s introduction into his profession more than a decade ago, but it’s not how he makes most of his money these days.

“I started when I was 12,” he said. “It was the first job I ever had. But back in the day I was a professional clown, and that makes it impossible to find a girlfriend.”

Maue, 24, founded the company Blow Up Success four years ago and now travels the country twisting different sizes and styles of balloons into lookalikes of celebrities, cartoon characters and other recognizable figures. His minimum orders, for companies’ marketing campaigns and conventions, bring in thousands of dollars.

The Comic Con featured all four Ninja Turtles; C-3PO, R2-D2, Yoda, and Darth Vader from Star Wars; and actor Danny Trejo, who was appearing at the convention.

In the past he’s made wearable Buzz Lightyear and Transformer balloon costumes, superheroes like the Hulk and the Flash, a police officer, even a balloon Donald Trump. He’s worked for car dealerships, the National Rifle Association and small businesses.

His career didn’t blow up overnight. For a few years, he was traveling the country doing this and that — “It’s a long story,” he said, “I was selling flying squirrels for a living,” — before landing in Austin, where he wasn’t making a living.

Maue lived and worked out of his car, delivering pizzas for a restaurant chain, unable to make ends meet.

“I would live in a hammock,” he said. “There was a scuba diving park on Lake Travis, it was really pretty, and I would just go, set up my hammock, take a shower in the gym.”

Maue looked for a way to maximize his tips during deliveries, and he didn’t have to look far. He started twisting up balloon roses to hand over along with the pies, and customers responded. People even started requesting the balloon delivery guy.

“I didn’t tell anybody I was doing it,” he said, “and I ended up getting in trouble for it a couple times.”

The money was so much better that he left the delivery job behind and started working off just tips at restaurants and other businesses that would let him set up shop.

Maue walked the Trail of Lights every year, making balloon elves and other Christmas-themed sculptures for people. He was making enough off tips to survive, but not enough to live comfortably. His next stop was the Florida State Fair, where he’d sold flying squirrels in the past.

Without a vendor permit, he bought a ticket to the fair and started looking for customers. Once again, he didn’t have to look far.

“In 10 days, I made $5,000, all cash, and it totally changed everything,” he said. “That was the moment that I realized as long as I took the thing seriously, that it would give me a really decent career.”

Little by little he built the business he has now, twisting together hundreds of balloons for hours at a time. “Just trying to turn myself into a balloon celebrity,” he said.

The artist is also turning his success story into part of the business. He gives motivational talks to companies, building sculptures live on stage as he does it. Maue also talks to high school students, teaching them to harness the talents they have and turn those into marketable skills.

His message encompasses what he’s learned the hard way: If you want to blow up, take what you’re good at, give it a twist, and watch your prospects inflate.

“It all goes back to the balloons,” he said.