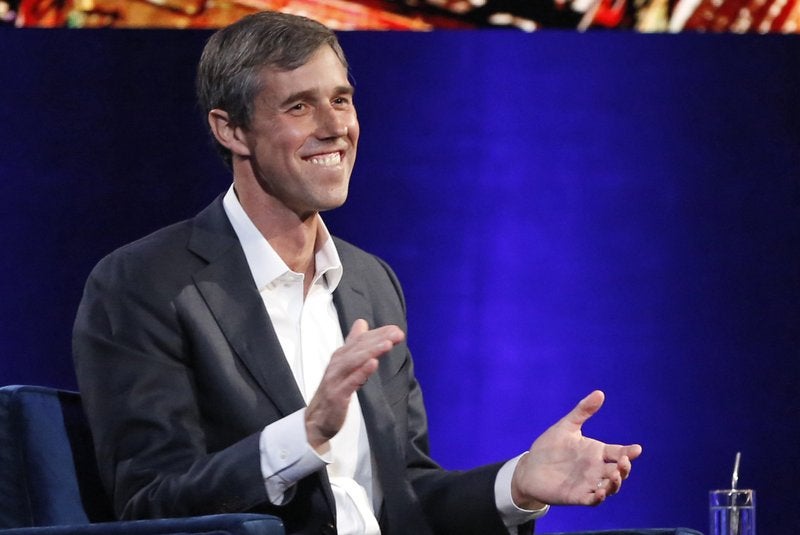 BURLINGTON, Iowa (AP) — Democrat Beto O’Rourke jumped into the 2020 presidential race Thursday, shaking up the already packed field and pledging to win over voters from across the political spectrum as he tries to translate his sudden celebrity into a formidable White House bid.

The former Texas congressman began his campaign by taking his first ever trip to Iowa, the state that kicks off the presidential primary voting. In tiny Burlington, in southeast Iowa, he scaled a counter to be heard during an afternoon stop at a coffee shop.

“Let us not allow our differences to define us as at this moment,” O’Rourke told a whooping crowd, his heels perched at the countertop’s edge. “History calls for us to come together.”

Earlier in the day, O’Rourke popped into a coffee shop in Keokuk while many cable networks aired live coverage. He took questions about his support of federal legalization of marijuana as well as the possibility of a universal basic income, all while characteristically waving his arms and gesticulating fervently.

“I could care less about your party persuasion,” O’Rourke said.

It was the kind of high-energy, off-the-cuff style that made him a sensation in Texas and a monster fundraiser nationwide, but O’Rourke also was clear that he doesn’t believe in strict immigration rules — drawing a distinction that could allow him to clash openly with President Donald Trump on the issue.

“Well, I think he’s got a lot of hand movement,” Trump told reporters in the Oval Office. “Is he crazy or is that just how he acts?”

After weeks of gleefully teasing an announcement, O’Rourke now must prove whether his zeal for personal contact with voters will resonate beyond Texas. He hasn’t demonstrated much skill in domestic or foreign policy, and as a white man, he’s entering a field that has been celebrated for its diverse roster of women and people of color.

Asked in Burlington how he’d contrast himself with other presidential hopefuls, O’Rourke said that he wasn’t sure but that he’d never been afraid to work with congressional Republicans. That may not be enough for Democrats anxious to angrily oppose Trump, however, and some other White House candidates draw shaper contrasts.

“The reason why I think I’m the best candidate for the presidency is very different than his,” New York Sen. Kirsten Gillibrand said of O’Rourke on Thursday. “I think we need a leader who’s going to fight for other people’s kids as hard as you’d fight for your own.”

In an email to supporters, California Sen. Kamala Harris noted that a “record number of women and people of color” are running and added that she was looking forward to “substantive debates” with candidates including O’Rourke. Massachusetts Sen. Elizabeth Warren also sent a fundraising email, saying, “I’m sure you’ve seen” O’Rourke’s launch.

In a recent interview with Vanity Fair, O’Rourke said he was “just born to be in” the presidential race. Asked about that after a Washington conference, New Jersey Sen. Cory Booker noted that he is dedicated to working with “communities that are really being left out and left behind.”

“I’ve got decades of showing people where my heart is, where my dedication is,” Booker said.

Still, he picked up several congressional endorsements on Thursday, as well as the backing of Iowa state Rep. Brian Meyer, who serves as an assistant minority leader in the state House of Representatives.

Until O’Rourke challenged Republican Sen. Ted Cruz last year, he was little known outside his hometown of El Paso, on Texas’ border with Mexico. But the Spanish-speaking, 46-year-old former punk rocker used grassroots organizing and social media savvy to mobilize young voters and minorities and get within 3 percentage points of winning in the nation’s largest red state.

O’Rourke’s record in Congress has drawn criticism from some for being too moderate, but he also spoke at length on Thursday about combating climate change and supporting the Green New Deal, a sweeping environmental plan backed by liberal Democrats.

Alice Davis, a retired teacher from Burlington, said O’Rourke “seems to be kind of a centrist, which I think we need.”

She said, “He’s not too far left, as some people are, and I think he could appeal to a lot of voters.”

At a house party in Muscatine on Thursday night, O’Rourke said it’s important for the U.S. to confront the truth about how black people have been treated. He also said that the United States needs to recognize that systematic racism exists in the country.

Other Democratic presidential candidates, including Harris, Warren and former Housing and Urban Development Secretary Julian Castro, have spoken of the need for the U.S. government to reckon with and make up for centuries of stolen labor and legal oppression. Some have talked about using tax credits and other subsidies as reparations, which O’Rourke did not mention Thursday.

O’Rourke started the race in southeast Iowa, where none of the 2020 Democratic presidential hopefuls have gone so far. Bordering the Mississippi River and featuring unemployment rates exceeding the state and national average, the area traditionally leans Democratic but supported Trump in 2016. Voters there helped elect Republican Gov. Kim Reynolds but also supported Democrat Abby Finenauer of Dubuque, who unseated Republican Rep. Rod Blum.

“These communities have slowly been hollowed out by the failure to transition from the extraction economy to a sustainable one,” said former Iowa Gov. Tom Vilsack, who got his political start in the region.