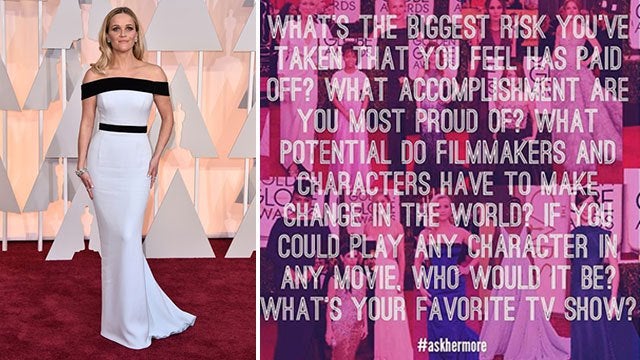 INDIANAPOLIS (WISH)  – Just hours before stars took on the red carpet at 87th annual Academy Awards in Los Angeles, one nominee took to her Facebook page to shed some light on a new movement.

Reese Witherspoon, the Nashville native nominated for Actress in a Leading Role for her part in “Wild,” wrote about #AskHerMore.

The movement is aimed toward changing the types of questions reporters ask female celebrities in the limelight, particularly on red carpets for special events.

Instead of asking about just their fashion choices or perhaps the men in their lives, #AskHerMore hopes to bring deeper questions into the picture.

“It’s meant to inspire reporters to ask creative questions on the red carpet,” Witherspoon wrote on her Facebook page.

The star said she loves the Oscars and fashion, and is excited to share who she’s wearing later in the night, but she’s also like to answer some of “these” questions.”

Those questions, which blanket an infographic for the movement, ask things such as “What accomplishment are you most proud of?” and “If you could play any character in any movie, who would it be?”

“There are so many amazing, talented nominees this year! Let’s hear their stories!” Witherspoon added.