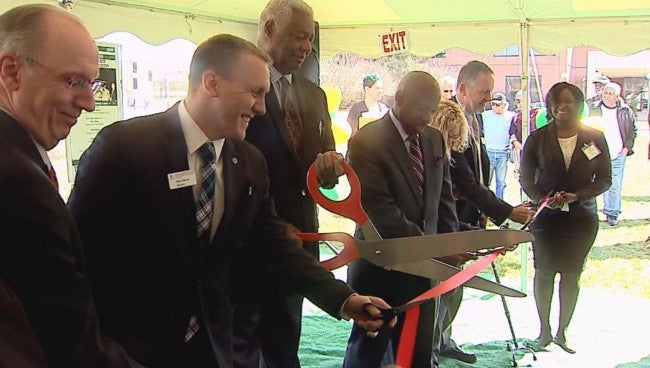 The dedication included a tribute to the 1955 Crispus Attucks state high school basketball champs and the Lockfield Gardens Dust Bowl. The team was the first all-black team to win a state title and the first in Indianapolis to win the Indiana boy’s state title.

“This month marks the 60th anniversary of the first of two consecutive Indiana state basketball championships for Crispus Attucks High School,” Tralicia Lewis, assistant vice chancellor for student affairs, said in a press release. “The Tigers, many of whom lived in Lockefield Gardens, learned the game at the legendary ‘Dust Bowl,’ a basketball proving ground that was located near an area now occupied by the Campus Recreation Outdoor Facility. ‘A Championship Tribute’ provides the university with an opportunity to pay tribute to players that learned the game in our neighborhood and to inform students of the history of our campus.”

The court was once a dirt playground, but became a popular place for pickup games and an annual tournament for the best of high school and college-age players from the city.