Over 1,500 turtles found inside luggage in Philippines 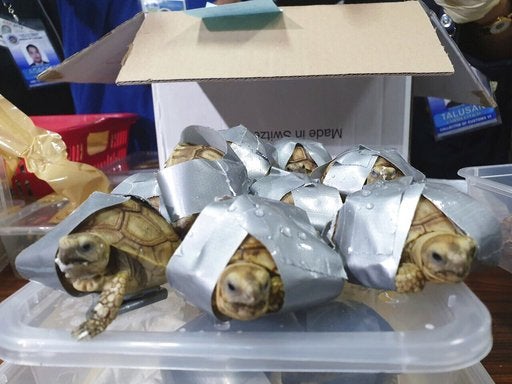 The various types of turtles were found Sunday inside four pieces of left-behind luggage of a Filipino passenger arriving at Ninoy Aquino International Airport on a Philippine Airlines flight from Hong Kong, Customs officials said in a statement.

The 1,529 turtles were turned over to the Department of Environment and Natural Resources’ Wildlife Traffic Monitoring Unit, the statement said.

Convictions for the illegal trading of wildlife are punishable by a prison sentence of up to two years and a fine of up to 200,000 pesos ($3,861).

In 2018, Philippine authorities turned over to the DENR a total of 560 wildlife and endangered species, including 250 geckos and 254 corals smuggled through air parcels, baggage and shipments, according to the statement.