Over half the road missing on street dividing Marion, Shelby counties 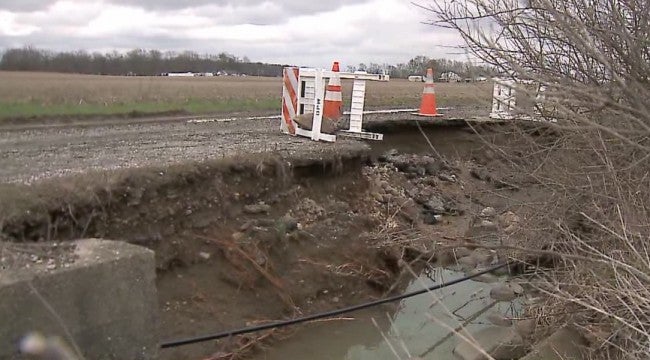 An resident is looking for answers as to why a hole taking up more than half his road has remained unfixed for two years.

The Fagel family lives right on the border of Shelby and Marion counties. While the home is in Shelby County, 24-Hour News 8 was told by Shelby County officials the road, which is the 6900 block of North 900 West is to be maintained by Marion County.

A culvert from two years ago has gradually grown into a monstrosity.

“If a car loses a tire, if he gets within a foot of that, it’s going to pull him into that hole and he’s going to end up in that culvert if he’s speeding at all,” said Dave Fagel.

The erosion takes up half of the road. About a quarter mile down is the only home beyond the hole, which belongs to Fagel and his wife.

“We’re very cautious of it. Stay away from it,” Fagel said.

And the rain this week has only made matters worse.

“We lost about two feet this last rain,” Fagel said, pointing to the fact the hole has continued to grow.

It’s hard for them, let alone anyone, to get to their home. In January Fagel went to the hospital with a heart issue. And he’s concerned beyond the health scare.

“We decided to go ourselves because we figured we could get there quicker, because if (medics) saw this, they might not be able to drive through,” he said.

We measured a fire truck, about eight feet wide, and it has about two feet of room to where the ditch begins.

But standing on the edge can be dangerous for a person, let alone for a 30,000 pound fire truck.

“I would be real leery to take any kind of fire truck or ambulance around that hole,” said Shelby County Sheriff Dennis Parks.

So why isn’t this hole fixed? Fagel said he doesn’t know.

He said Shelby County officials told him to reach out to the Indianapolis Mayor’s Action Center, where you can report road issues.

“I think by the end of this spring, the road is going to be impassable for sure,” Fagel said.

Over two years, Fagel said he’s called about 10 times. It was so bad Sheriff Parks sent in a complaint last May. Until 24-Hour News 8 contacted him, he thought it was fixed.

“I’m sure anybody that would see this report would be pretty concerned about it also if that was their road,” said Sheriff Parks.

In the past when the Indianapolis Department of Public Works returned Fagel’s calls, they said since they put up barricades, their work was finished.

He said the hole was smaller at the time, but he doesn’t understand why that was the end of their work.

So two years later, Fagel has a message to whoever can fix this.

“It’s been two years, that’s more than enough time to get something like this repaired,” he said.

DPW nor the city of Indianapolis has responded to a 24-Hour News 8 request for comment at this time.