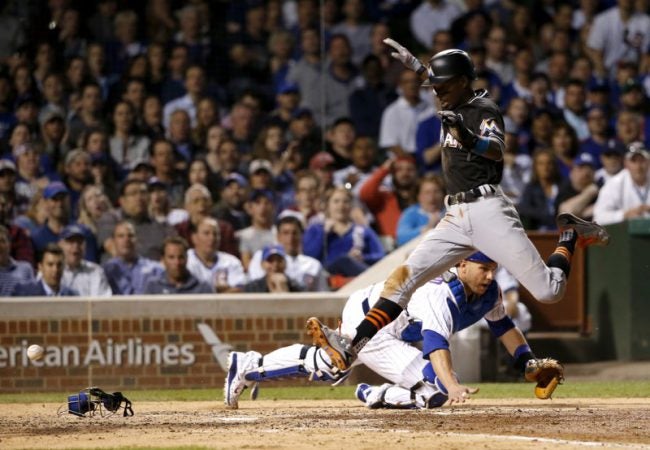 Solo homers by Realmuto in a three-run fourth and Ozuna in the fifth against John Lackey (4-6) helped stake Miami to a 5-2 lead.

Dee Gordon added two hits and scored two runs, and the Marlins won for the eighth time in 11 games. They stopped the Cubs’ season-high win streak at five.

They were trailing 6-4 in the eighth when Jon Jay singled with two outs and scored on Schwarber’s double to right-center against Nick Wittgren. A.J. Ramos then struck out Happ to end the inning and worked the ninth for his ninth save in as many chances. He retired Jason Heyward on a fly to center with a runner on first to end the game.

Lackey gave up five runs and seven hits in six innings and was once again hurt by the long ball. The 38-year-old right-hander has allowed 16 home runs.

The Marlins’ Jose Urena (4-2) improved to 3-0 in his past four starts despite a 7.45 ERA in that stretch. He lasted five innings, allowing three runs and three hits while walking three.

Marlins: RHP Tom Koehler (right shoulder bursitis) is scheduled to pitch in a rehab assignment Thursday with High-A Jupiter. . Marlins manager Don Mattingly said the club is working on a plan for the return of LHP Justin Nicolino (blister on left index finger), who is eligible to come off the DL on Saturday. The Marlins want to make sure starters Dan Straily, Urena and Edinson Volquez are working on the right amount of rest. “They don’t mind pitching on six, they don’t like pitching on seven,” Mattingly said. “So we’ll try to work it where those guys stay in their rhythm and we’ll work Nico in.”

Marlins: Miami sends RHP Edinson Volquez (2-7, 3.79 ERA), coming off the sixth no-hitter in franchise history, to the mound as they open a four-game series at Pittsburgh against RHP Gerrit Cole (3-5, 4.27). Volquez tossed a gem against Arizona last Saturday, staying in after he hurt his right ankle in the first inning.