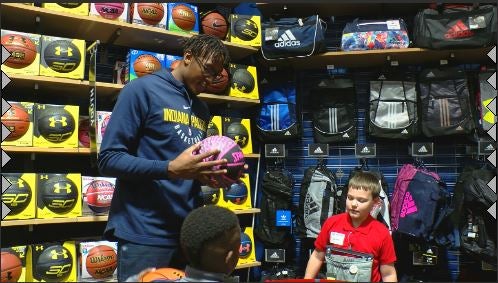 INDIANAPOLIS (WISH) — Indiana Pacers center Myles Turner took time on his off day to give back to kids in central Indiana.

Those kids got to pick pretty much whatever they wanted from Dick’s Sporting Goods in Castleton Square Mall. It was a lucky day for a handful of Indiana kids. They had $200 to spend at the store. All paid for by Turner.

“It’s all about creating memories and lasting moments that will carry throughout their life,” he said.

Organizers said the kids were selected because they may not get presents this holiday season. The organization Talk Poverty estimates nearly 1 million Hoosiers live in poverty.

Turner was happy to help and give his feedback on what to buy.

The kids couldn’t believe they met an NBA player.

“He’s cool. He’s a lot taller than he looks in the game,” said Connor Jenkins, who said he needed new shoes because he’s growing so fast none of his fit.

Turner said giving back is important to him beyond these events.

“What I do is I get these little ‘go’ bags, packages that contain Kleenex, hand warmers, fruit cups, anything you can think of that the less fortunate could need,” he said. “I keep these bags in the back of my truck. Anytime I go around and see people in need I just hand them out.”

He calls this initiative WARM, We All Really Matter. He said it’s as simple as having those bags to hand out and does not need to be costly. It just requires a little time and effort to want to make a difference.

At 21 years young, he’s having fun and making an impact. He said it can only take a small gesture to stand for, we all really matter.