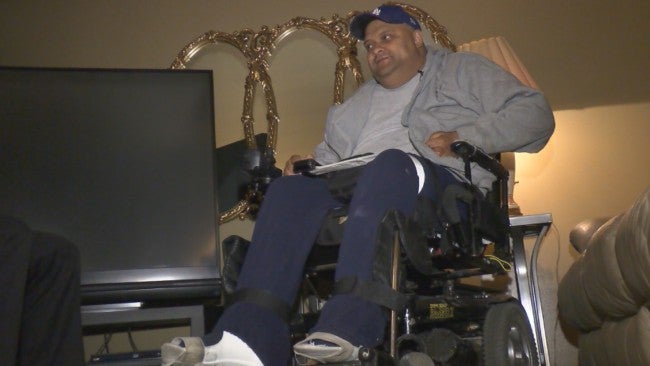 INDIANAPOLIS (WISH)–A former Wayne Township firefighter who was paralyzed on the job is asking for the public’s help so he can get a new wheelchair accessible van.

Rodrick Lambert is currently in a national contest. If he receives enough votes from the public by May 31 he could win a new van.

On May 23, 1995, Lambert was riding in a fire truck that flipped during a run on the west side of Indianapolis. The accident killed one firefighter and paralyzed Lambert, then 23 years old.

“It was a struggle at first,” he said. “I had to learn to adapt to a new lifestyle after I was told I’d never be able to walk again.”

Just a few years after Lambert fulfilled a lifelong dream of becoming a firefighter, that dream was over. So he picked up the pieces and started down another path.

Today, he uses his 15-year-old wheelchair accessible van to get to work at Lowe’s Home Improvement. He said the van has more than 142,000 miles on it.

“Over the time it’s just had certain repairs for this and that,” he said.

Lambert said he can’t afford much more maintenance. That’s why he’s asking people to vote for him in the contest.

Lambert also uses his van to get to church, doctor’s appointments, and visits to the firehouse, where his friends are helping him spread the word online.

People can vote for any contestant once a day until May 31. Voters will need to register at mobilityawarenessmonth.com and then search for Rodrick Lambert of Indianapolis.

Wayne Township firefighters have also organized a fundraiser for Lambert. It will be held August 1 at the Indianapolis Professional Firefighters IAFF 416 union hall.