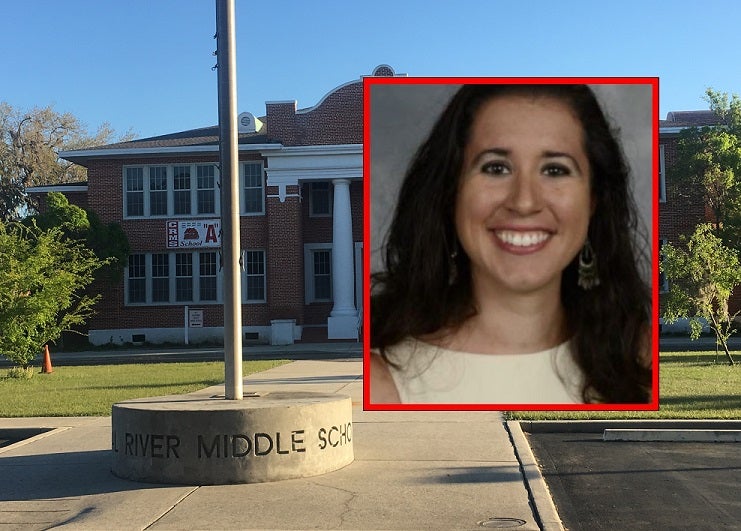 The seventh-grade teacher has been removed from her teaching job as they investigate complaints that she made racist remarks during a podcast she hosts and in class.

Through an attorney, Volitich claims the podcasts are “political satire.” Her statement reads in part:

None of the statements released about my being a white nationalist or white supremacist have any truth to them, nor are my political beliefs injected into my teaching of social studies curriculum.”

However, Meredyth Bleakley’s child attends the school and she says Volitich has expressed racist views in the classroom.

“They were talking about segregation in a civil rights capacity and the teacher somewhat eluded that segregation might possibly be okay in her opinion,” said Bleakley.

Some people in the Crystal River community are supporting the teacher – one woman drove by the school as news crews were outside, screaming from her car, “Leave her alone!”

A neighbor demanded reporters leave the property in front of Volitich’s apartment and said, “You guys are making such a big deal out of nothing.” He added the teacher is friendly to him.

“She’s very quiet. Keeps to herself,” said the man, who refused to identify himself.

Other parents are outraged that Volitich has expressed her opinions to her seventh-grade students.

“I don’t think she should be a teacher anymore. Not here,” said Sarita Bryant.

Citrus County School Board members refused to discuss anything about the teacher, her views or the investigation on Monday. Some say they have been advised by the school district’s attorney to not talk with the media.

One Crystal River Middle School student doesn’t like what he’s seen and heard about his former teacher.

Here’s a sample of what she’s posted:

So many other researchers have already looked into this and that’s just the way it is. There are races that have higher I.Q.’s than others.”

Another student at Crystal River Middle School said he just watched some of the videos today.

“People already told me like, she, they didn’t like ’em or stuff like that. And how she was giving more love to other skin colors as us,” said Jeremiah Hernandez.

Other evidence includes posts to her Twitter account showing pictures of the former KKK Grand Wizard, and this post: “It isn’t supremacist or hateful to prefer your own people over others.”

Volitich denies being a racist, saying she doesn’t teach her beliefs in class and claims her posts are political satire and exaggeration.

Trevon Smith said he had bad feelings about Volitich.

“I knew something but like, I thought it wasn’t true but I know it’s true now because I heard the things she’s been saying on social media,” he said.