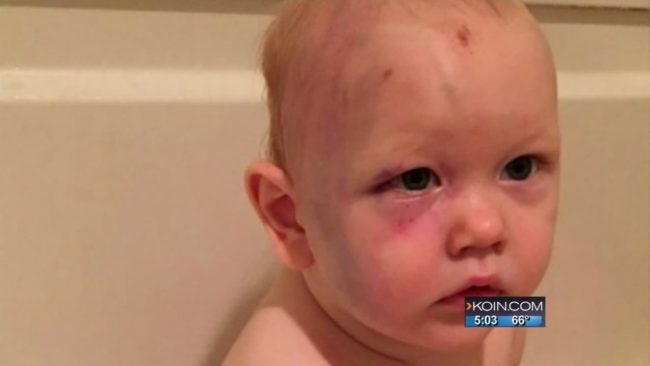 SHERWOOD, Ore. (KOIN) – When Alicia Quinney and Joshua Marbury came home from a night out, they found their 1-year-old screaming and their babysitter asleep.

“When we came in here, the guy (babysitter) was asleep (on the couch),” Marbury said.

Jacob was in on their bed, crying. Quinney picked him up and soothed him, she said, and he fell asleep.

The next morning, his parents were shocked to see bruises on little Jacob.

“The first thing I saw was his black eye and at first I thought, ‘What happened to his eye?’ And then he turned over and I saw the whole side of his face was black-and-blue,” she told KOIN 6 News.

The babysitter, a family friend, at first said he didn’t know what happened, but then, they said, he dropped Jacob on cement outside their door

But that story didn’t make sense to Marbury and Quinney because Jacob didn’t have any scrapes.

But there were dots underneath his collar bone, marks inside and around his ear, bruises on his arm and his back.

Marbury said the babysitter later admitted to police hitting Jacob, but said police needed to build a case before making any arrest.

Two months passed and the case is now with the district attorney’s office. No charges have been filed yet, and the case is under evaluation because of a 2012 Oregon court ruling making it tougher to prosecute abuse cases with victims who can’t talk.

Attorney Kevin Sali said a 20-12 court of appeals ruling can make it difficult to move forward with abuse cases when a victim can’t speak and describe their pain. “They believe they’d have difficulty meeting the physical injury requirement,” Sali said.

“So if someone sees these photos, they see this bruising, what appears to bruising, appears to be cuts on this child, I think anyone would say that’s got to be enough,” Sali said. “That’s a case by case determination for a prosecutor to make.”

Marbury said they can’t get out of their heads what could have happened. “We picture it ourselves and it makes our stomachs turn and just feel angered about it.”

“This guy,” Quinney said, “is living his life and he’s lived his life freely for 3 months and we’ve had to sit here and be as patient as we could be, being traumatized, are going to be traumatized, the rest of our life – while this person can do whatever he wants to do.”

Their 3-year-old daughter saw what happened to Jacob and she is now in counseling, they said.

On May 20, Marbury took to his Facebook page and posted a lengthy entry. In part, it read:

“…DO YOUR PART, you have a verbal confession and evidence showing a hand print!!!! A dead body cant tell you who killed them. Yet a baby isn’t held to the same standard because he cant talk???? Well neither can a dead body. …“

To them, the pictures say it all.

Once Marbury put it on social media, “it started to get the word out to change this for my son and, you know, put this person in jail.”

But now that it’s gotten so much attention, Marbury and Quinney feel the issue is bigger.

The post has attracted worldwide attention from people, lawmakers and law enforcement.

Captain Mark Daniel with the Sherwood Police Department told KOIN-TV they have referred the case to the District Attorney’s office. Daniel said the parents are not being investigated and believe it is a legitimate case.

The babysitter has been interviewed and is considered a person of interest, but his name has not been released.

Daniel said they are hopeful this case can move forward.

Little Jacob’s family is not just sitting idly by. A family friend began a petition on Change.org to get “Justice for child abuse victims who are unable to voice their pain in the eyes of the law.“ At this writing more than 12,000 people have signed this petition.

They’ve also started a GoFundMe page to help defray costs associated with any legal fees they may encounter as they try to change the law.

And the hashtag #JusticeforJacob has attracted global notice along with the story.

Quinney said so many people have reached out to share their similar situation. “They’re afraid to speak up,” she said.

“We want to make that change for everybody.”

The case has also caught the attention of Barbara Peschiera with the Children’s Center, a local advocacy group. ” It’s hard to believe, it really is. Because you and I would like at those injuries and say that is abuse,” Peschiera said.

The Washington County DA, which is evaluating the case, could change course and prosecute. Sali says the social media outcry could have an impact.

“Prosecutors are public servants,” Sali said. “They serve under elected officials so they’re sensitive to the will of the community and you’ll see that happen at times.”