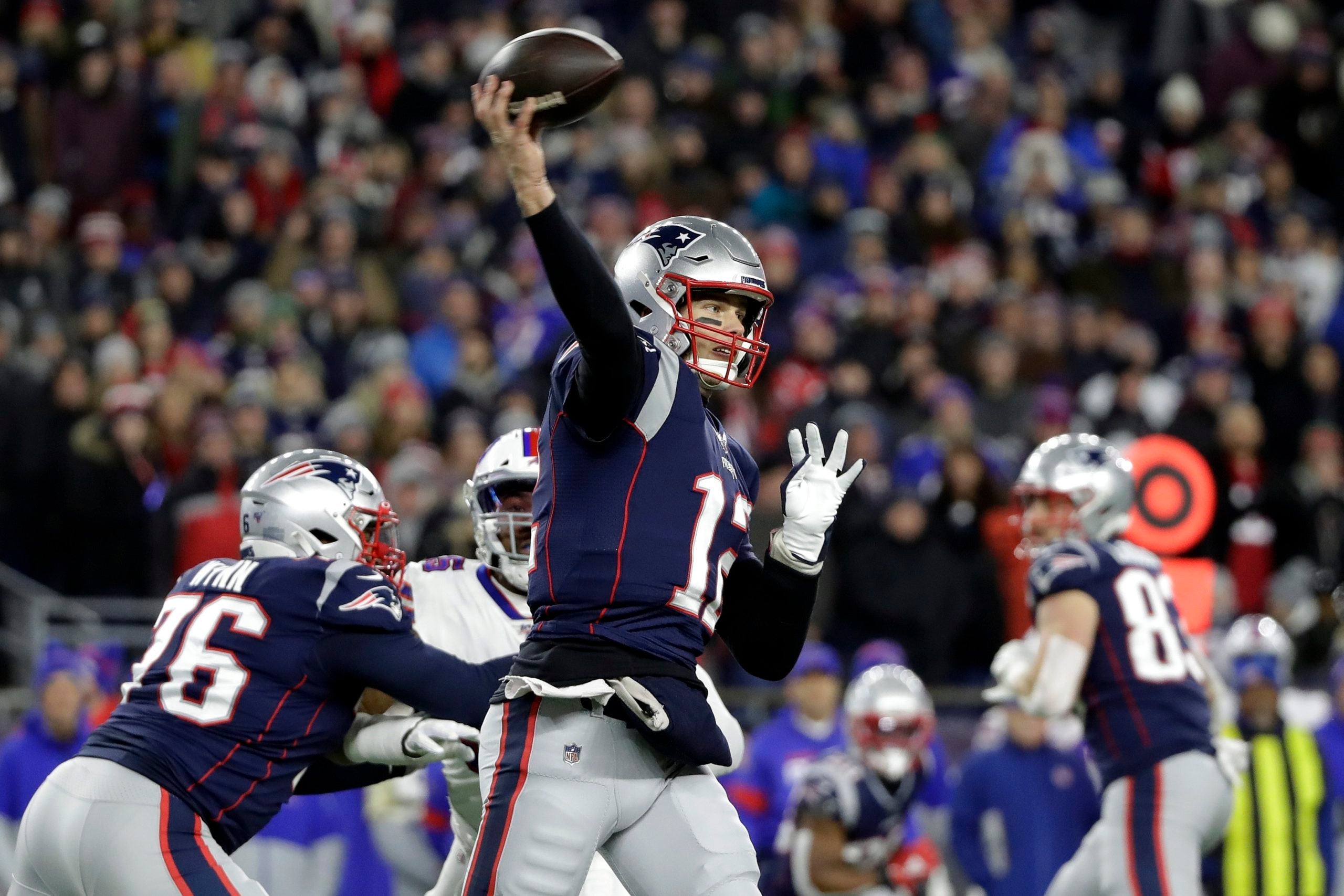 FOXBOROUGH, Mass. (AP) — Tom Brady passed for 271 yards and a touchdown, sneaked for a third-down conversion to set up another score and threw a downfield block on another scoring drive to help the New England Patriots clinch their 11th AFC East title in a row by beating Buffalo 24-17 on Saturday.

With Bills visiting for a rare late-season matchup while the division was still at stake, Sony Michel ran for 96 yards and Rex Burkhead rebounded for an opening-drive fumble to catch four passes for 77 yards and run for 20 more. Both teams had already clinched playoff berths; the Patriots (12-3) remain in contention for a first-round bye or even the No. 1 seed in the AFC.

Josh Allen completed 13 of 26 passes for 208 yards and ran for 43 more, including a first down on fourth-and-1 from the Patriots 30 with about three minutes left. After driving to the New England 8, Allen over threw Dawson Knox in the end zone and then was sacked by Adam Butler. Facing fourth-and-goal from the 15 with just over one minute left, he was forced out of the pocket and had to throw the ball up for grabs in the end zone, where it was knocked down by J.C. Jackson.

Cole Beasley caught seven passes for 108 yards, and John Brown had a 53-yard touchdown reception for the Bills (10-5), who have qualified for the playoffs for the second time since 1999. They have not won a playoff game since 1995, following their last division title, when Marv Levy’s team beat Don Shula’s Miami Dolphins in the wild-card round.

Brady, who is 42 and nursing a right elbow injury, improved to 32-3 against the Bills, and Buffalo hasn’t beaten the Patriots in six games under coach Sean McDermott. This one was clinched when Burkhead ran it in from 1 yard with 5:11 left; Brady found Julian Edelman for the 2-point conversion to make it a seven-point game.

Garoppolo made up for a mostly pedestrian game for the 49ers (12-3) by delivering two big throws on the final drive after taking his fifth and sixth sacks.

He found Kendrick Bourne on an 18-yard pass over the middle to convert the first long third down and then hit Emmanuel Sanders behind a blown coverage for 46 yards to set up the winning kick.

The Niners then ran out on the field to celebrate while the Rams (8-7) were eliminated with the loss. Minnesota became the fifth team to clinch a berth in the NFC with Dallas and Philadelphia battling for the final spot.

The victory kept the Niners in control in the race for the NFC’s top seed and home-field advantage throughout. They still need to win next week at Seattle to win the NFC West, otherwise they will be relegated to wild-card status.

Garoppolo finished 16 for 27 for 248 yards with one touchdown and two interceptions.

Jared Goff connected on a 22-yard TD pass to Cooper Kupp in the third quarter to put the Rams ahead 28-24.

Roby raced 27 yards up the right sideline after picking off Winston’s first pass of the game, the sixth pick-6 the Bucs quarterback has thrown this season. Jahleel Addae’s interception with 1:27 remaining, ended any realistic chance the Bucs had of fully overcoming Winston’s mistakes.

The Texans (10-5) won despite not getting an especially sharp performance from Deshaun Watson, who completed 19 of 32 passes for 184 yards and one interception. The Bucs (7-8) sacked him five times and held Houston to one offensive TD on Carlos Hyde’s 1-yard run in the second quarter.

The Texans ended Tampa Bay’s four-game winning streak and are AFC South champions for the second straight year. They join the Patriots and Chiefs as the only teams with four division titles since 2015.

A week after becoming the first player in NFL history to throw for more than 450 yards in consecutive games, Winston was 25 of 48 for 335 yards and one touchdown. He tossed an interception on Tampa Bay’s opening drive for the fifth time in seven games, and nearly watched Houston go up 14-0 when Justin Reid intercepted him on the Bucs’ next possession.

Instead, the Texans settled for a field goal after a penalty for a blindside block negated what also would have been a 27-yard return for a TD. Hyde’s TD, set up by Peyton Barber’s fumble, put the Texans up 17-3.

A resilient Winston rallied the Bucs with a pair of touchdowns in the last two minutes of the opening half to make it 17-17. The teams traded third-quarter field goals, setting the stage for Watson to move the Texans into position for the go-ahead points, Fairburn’s 37-yard field goal with 7:11 remaining.