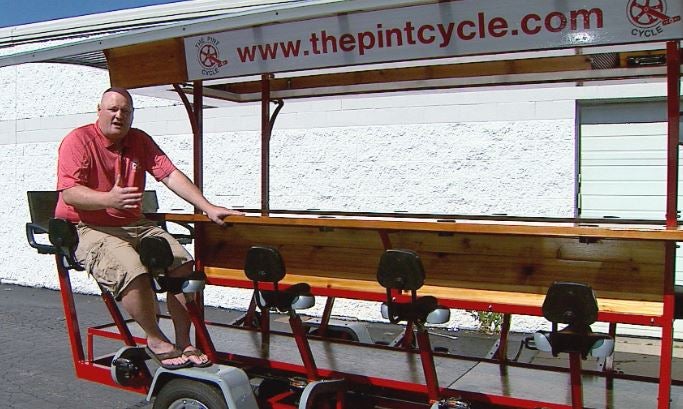 FISHERS, Ind. (WISH) – A pedal pub is about to give Fishers a new way to exercise and party.

The Pint Cycle is part of a growing trend across the country.

Hutchinson spent the past year working to bring the attraction to Fishers. It’s a form of entertainment he believes caters to the city’s growing young professional movement.

“It gives you a unique opportunity to do something in a suburb that you don’t get to do in many other large markets,” Hutchinson said.

Riders bring their own beer or wine. Everyone gets a seat, and a sober driver steers to nearby bars.

“I think it would be kind of interesting to see if Fishers can adapt to this,” Fishers resident Andrew Scarlott said.

To start, The Pint Cycle will do limited tours and schedules, mainly around two businesses. But once a new brewery and restaurant open later this summer on Lantern Road, the attraction will go to a seven-day operation.

All stops are near 116th Street. But if you’re worried about a group of peddlers blocking traffic, don’t be.

“Our route is entirely north of 116th Street, and we won’t go on 116th Street at all,” Hutchinson said.

A spin will cost you about $30 dollars. It doesn’t include any alcohol, but riders get a cup, drink specials, and a cool way to jam around downtown Fishers.

“[It’s] something fun to do with my friends,” Roberts said. “Something to kind of get away from reality for a little bit.”

Tours will start Tuesday following a ribbon cutting. It’s not just a tour; the company is building rides around city hall festivities.