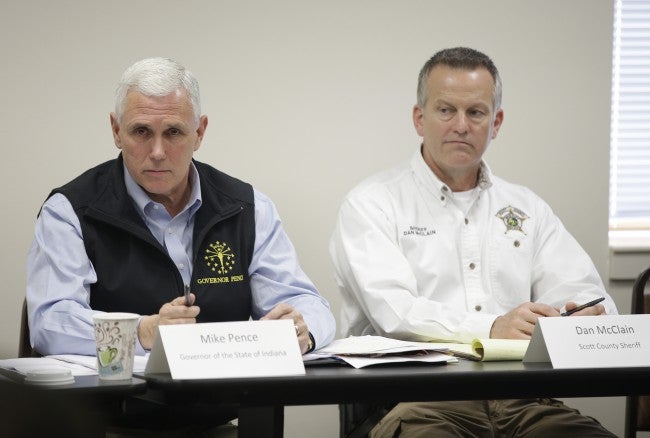 INDIANAPOLIS (WISH) — Thursday, Governor Pence took steps to address the growing HIV outbreak in Scott County and declared a public health emergency in the county. He also gave health officials there the power to request a needle exchange program to stop what is being called an epidemic in its tracks.

“This is all hands on deck,” Pence said. “This is a very serious situation.”

Typically the annual number of confirmed HIV cases in Scott County is five but, to date, there are 79 and that number is only expected to grow.

“There is the potential the HIV virus will spread by other means including sexual contact but this is truly a crisis that is centered on a crisis of drug abuse in the region,” Pence said.

The emergency order has several components – from a task force to efforts to promote enrollment in the Healthy Indiana Plan which provides free testing and treatment for HIV – to a short term, focused needle exchange program.

It’s something Pence has a long record of opposing as an anti drug policy.

“If the legislature sent me a broad based needle exchange bill, I would veto it,” he said. “I don’t believe that effective anti drug policy involves handing out paraphernalia to drug users by government officials. I reject that.”

But this is different he said.

One that calls for an aggressive approach and Pence wants those affected to know help is available.

“We will not only contain the spread of this virus but we’re going to speed relief and medication to people that have been affected by it,” he said. “I’m very confident that our local health care provider community, working with the state department of health is going to implement an effective strategy that will become a model for the nation.”

The emergency order is only in effect for 30 days and will be reevaluated at the end of that time.

Rep. Charlie Brown (D-Gary) questioned, however, why the needle exchange program was limited to Scott County. He said there are close 1,700 identified cases of HIV in Lake County, and around 4,700 in Marion County.

“Certainly the provisions of the emergency declared in Scott County would be helpful to the health officials in Lake and Marion Counties: incident command centers, a coordinated response that involves the health care, law enforcement and emergency response communities,” Brown said. “And designing and implementing a targeted, short-term needle exchange program to contain the epidemic.”

Brown said he does believe the steps being taken in Scott County are a “necessary and correct response to a terrible situation.”

But, he intends to ask Pence to implement similar measures in Lake and Marion Counties.

“Certainly those folks deserve the same concern as the unfortunate cases in Scott County,” Brown said.