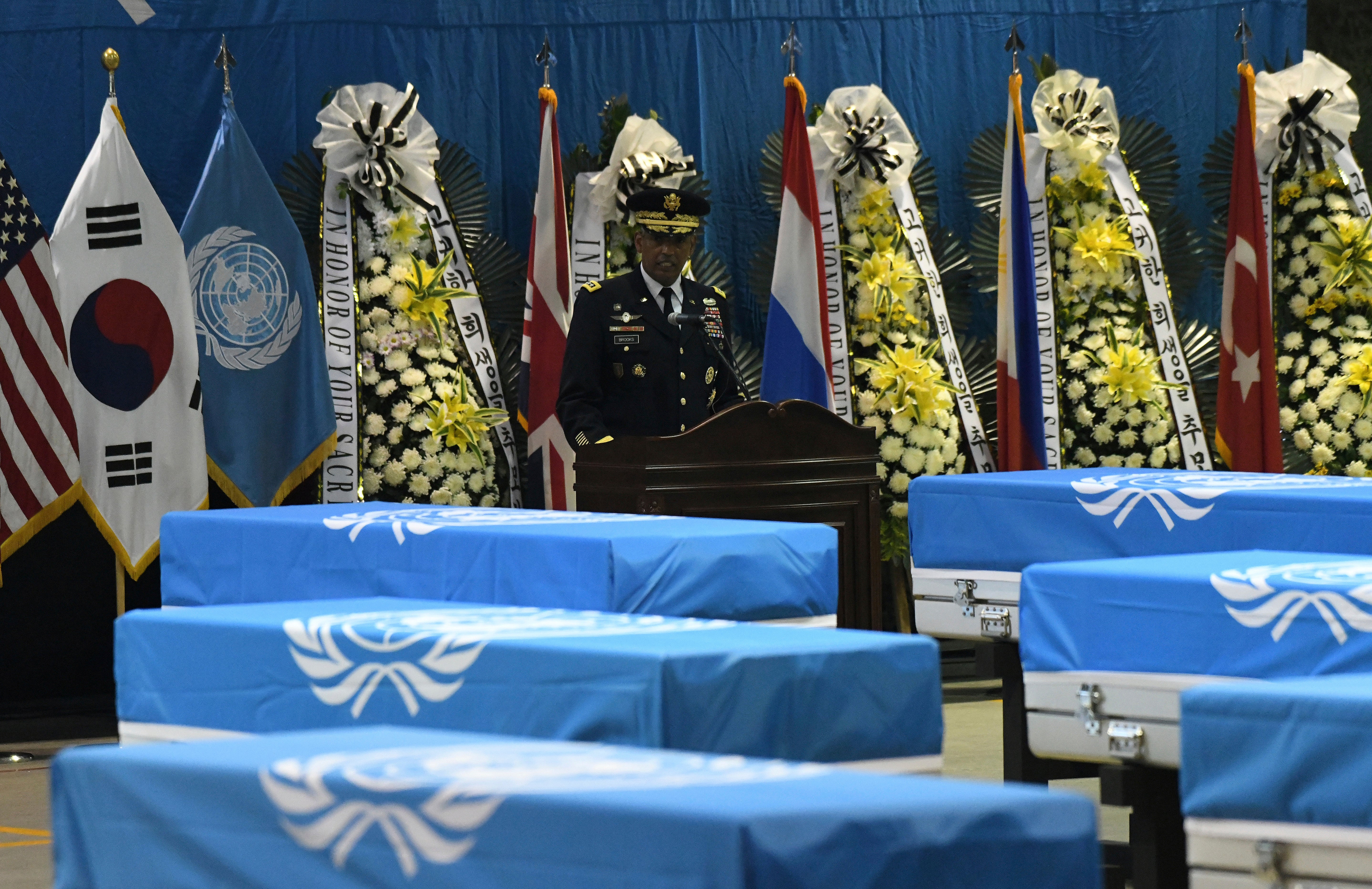 HONOLULU (AP) — Decades after the end of the Korean War in 1953, the remains of dozens of presumed U.S. war dead returned Wednesday to Hawaii for analysis and identification. The U.S. military believes the bones are those of U.S. servicemen and potentially servicemen from other United Nations member countries who fought alongside the U.S. on behalf of South Korea during the war.

U.S. Vice President Mike Pence spoke at a ceremony before the flag-draped containers carrying the remains were brought off airplanes in sets of four as solemn music played.

“Whosoever emerges from these aircraft today begins a new season of hope for the families of our missing fallen,” Pence said. “Hope that those who are lost will yet be found. Hope that after so many years of questions, they will have closure.”

Each container was accompanied by one Marine, one sailor, one soldier and one airman. They set the caskets gently on risers lined up inside the hangar as Pence stood watching with his hand over his heart. Adm. Phil Davidson, commander of the U.S. Indo-Pacific Command, saluted.

Some of the invited guests wiped tears from their eyes during the procession of the containers off the planes.

North Korea handed over the remains last week. A U.S. military plane made a rare trip into North Korea to retrieve the 55 cases.

Hanwell Kaakimaka’s uncle, John Kaakimaka, is among those who never came home.

“We’ve been watching the news, and we’ve been hopeful that my uncle is among the remains,” he said, adding that it could bring his family some closure.

His uncle, who was from Honolulu, was a corporal in the 31st Infantry Regiment of the Army’s 7th Infantry Division. He went missing on or about Dec. 2, 1950.

Hanwell Kaakimaka said the story he heard from his dad was that his uncle was injured and was being brought back from the front when Chinese troops overran the area and attacked the convoy.

If John Kaakimaka’s remains are ever identified, his family wants him to be buried in a cemetery at the base of Diamond Head crater in Honolulu because that’s where his parents and brothers were laid to rest, Hanwell Kaakimaka said.

The Kaakimaka family provided DNA samples to the U.S. military’s Defense POW/MIA Accounting Agency over a decade ago, hoping officials would be able to make a match.

The agency identifies remains of servicemen killed in past conflicts. It typically uses bones, teeth and DNA to identify remains along with any items that may have been found with remains like uniforms, dog tags and wedding rings. But North Korea only provided one dog tag with the 55 boxes it handed over last week.

Before the remains were put on military planes bound for Hawaii, hundreds of U.S. and South Korean troops gathered at a hanger at the Osan base in South Korean for the repatriation ceremony.

“For the warrior, this is a cherished duty, a commitment made to one another before going into battle, and passed on from one generation of warriors to the next,” Vincent Brooks, chief of the U.S. military in South Korea, said in a speech.

U.S. Defense Secretary Jim Mattis said last week that the return of the 55 boxes was a positive step but not a guarantee that the bones are American.

A U.S. defense official said Tuesday that it probably will take months if not years to fully determine individual identities from the remains. The official, who discussed previously undisclosed aspects of the remains issue on condition of anonymity, also said North Korea provided a single military dog tag along with the remains. The official did not know details about the single dog tag, including the name on it or whether it was even that of an American military member.

The repatriation is a breakthrough in a long-stalled U.S. effort to obtain war remains from North Korea.

The bones’ return was part of an agreement reached during a June summit between U.S. President Donald Trump and North Korean leader Kim Jong Un. Trump thanked Kim for the return.

During the summit, Kim also agreed to “work toward complete denuclearization of the Korean Peninsula” in return for Trump’s promise of security guarantees. Trump later suspended annual military drills with South Korea which North Korea had long called an invasion rehearsal.

But Trump now faces criticism at home and elsewhere that North Korea hasn’t taken any serious steps toward disarmament and may be trying to buy time to weaken international sanctions against it.

North Korea halted nuclear and missile tests, shut down its nuclear testing site and began dismantling facilities at its rocket launch site. But many experts say those are neither irrevocable nor serious steps that could show the country is sincere about denuclearization.

North Korea may want to use the remains’ return to keep diplomacy with the United States alive and win a reciprocal U.S. concession. Experts say the North likely wants a declaration of the end of the Korean War as part of U.S. security assurances.

An armistice that ended the Korean War has yet to be replaced with a peace treaty, leaving the peninsula in a technical state of war. North Korea has steadfastly argued its nuclear weapons are meant to neutralize alleged U.S. plans to attack it.

Efforts to recover remains in North Korea have been fraught with political and other obstacles since the war’s end. Between 1990 and 1994, North Korea unilaterally handed over 208 caskets to the U.S., which turned out to contain remains of far more than 208 individuals, although forensics specialists thus far have established 181 identities.

A series of U.S.-North Korean recovery efforts, termed “joint field activities,” between 1996 and 2005 yielded 229 caskets of remains, of which 153 have been identified, according to the Pentagon.