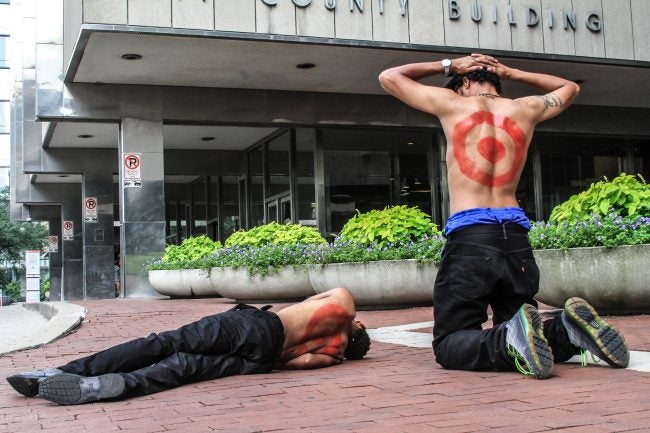 INDIANAPOLIS (WISH) – Protests in Charlotte, NC after an officer-involved shooting are sparking protests in Indianapolis, but not how you might expect.

The Black Lives Matter Movement is taking a different approach, using art to get its point across. The protest may be silent, but there’s a loud and clear message .

“The protest is really about conveying a message to the public how black people feel,” said Rehema McNeil, the creative director, for the group Point Blank Protest.

It’s playing out through the lens of a camera. Black men are depicted in photographs with targets on their backs.

“It can happen at any place, at any time, to anybody. and that’s what’s scary is waking up and not knowing when it can happen to you, or your loved ones,” said McNeil.

The “it” they’re talking about is being a victim of police brutality.

The shoot took place at different sites around Indianapolis, the War Memorial, the City County Building and Monument Circle.

“Everyday we wake up and we feel like we’re walking targets, and it’s due to the police brutality that’s been going on for a while now,” said McNeil.

“Immediately I wanted to take that target off their back. It brought emotion because it can happen,” he said. “It’s very scary as a father because you just never know. You never know. My wife everyday, she tells me, be careful. Now we’re at a point in time where you have to say that. You never know if it’s going to be the last time (you see your family).”

Couples are also in the pictures, holding signs, pleading for their loved ones’ safe return.

They said this silent protest, through art may be the most effective protest of all

“Pictures can show a thousand words,” said McNeil. “Having images that people can convey on their own is more powerful than trying to tell them.”

The protest is currently being spread through social media.