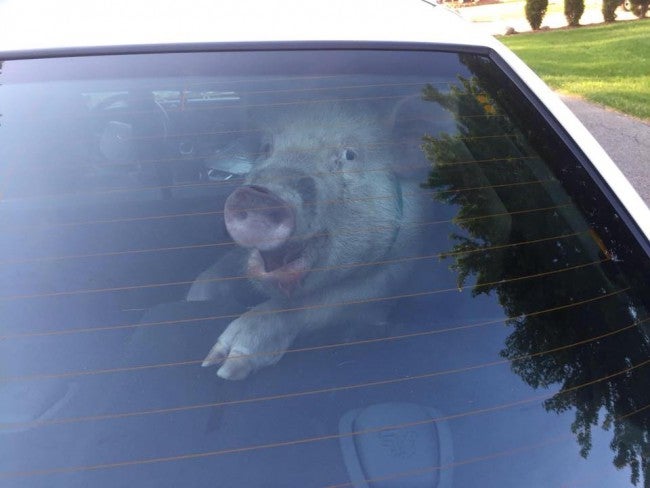 SHELBY TOWNSHIP, Michigan (WISH) – A pig in Michigan is in deep doo doo.

Last week, the Shelby Township Police Department posted a picture on their Facebook page of something you don’t see too often – a runaway pig in the back seat of a squad car.

“I don’t have the full story yet, but one of the guys on the road just sent me this…..one in custody,” the Facebook post read.

The pig seems all too happy with herself in the photo, seen smiling from ear to ear. A little while after posting the original picture, police gave their followers a…..stinky update.

That second photo showed the back seat of the police car where the pig had been sitting, smiling. The seats are filled with pig droppings.

“Now we know why that pig is smiling in the first pic! Lol,” police wrote.

Police added the owner eventually called and the pig was returned home.

They also posted this “post arrest” video of the “perp.”

If you have been following our piggy story, you will get a kick out of this. Officer Treworgy just sent me this “post arrest” video of the “perp”. You can hear Tree say something like ” yup, that’s in my police car”….. Almost like he’s trying to convince himself that there is actually a pig in the back of his patrol car. Lol!Posted by Shelby Township Police Department on Friday, May 29, 2015