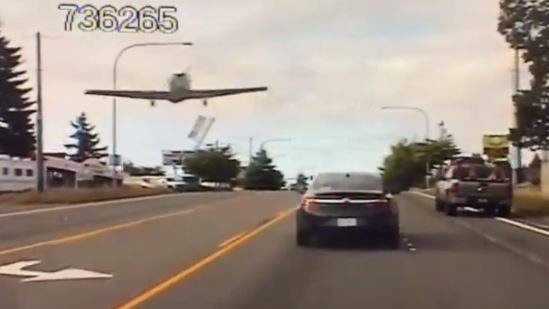 PORTLAND, Ore. (KOIN) — A single-engine propeller plane made an emergency landing on a road in Pierce County, Washington Thursday — and stopped at a red light.

The Thursday morning incident was caught on the dashcam of Washington State Patrol Trooper Thompson around 8:15 a.m. The trooper was on patrol when he saw the plane approaching the highway near 138th, WSP tweeted.

The trooper made a U-turn, turned on his lights and siren to slow the traffic and made room for the pilot to make a safe landing.

The plane had a fuel system malfunction but the pilot managed to land safely and came to a stop at a red light in the center lane of the highway.

Motorist Dennis Diessner said the plane came so close to his car that he could have reached out and touched it. He said he pulled over to make sure the pilot was OK.

Batiste says a trooper who was nearby helped the pilot push the plane into a parking lot.