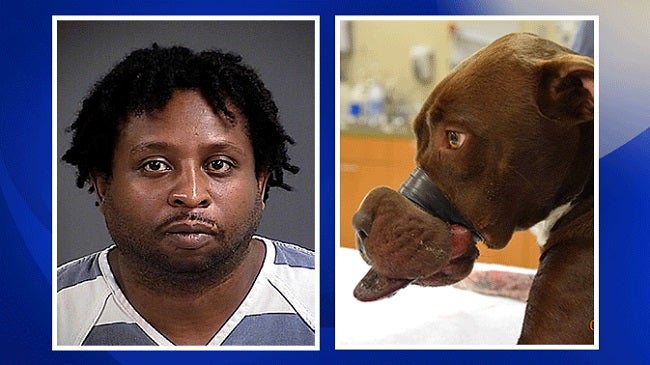 CHARLESTON, S.C. (WCBD) – North Charleston Police have made an arrest in the animal cruelty case that has been spread worldwide.

William Leonard Dodson, 41, was preliminary charged with ill treatment of animals and torture. Police found Dodson in the area of Quitman Street and Calvert Street. He is expected to be in bond court on Tuesday.

Caitlyn the dog was found in critical condition last week on a Good Samaritan’s doorstep with electrical tape tightly wound around her muzzle.

The tape was so tight around Caitlyn’s muzzle that her tongue was caught between her teeth, stopping blood flow to her tongue. Officials think that the tape was on Caitlyn for up to 36-48 hours.

The Charleston Animal Society Senior Director of Veterinary Care, Dr. Lucy Fuller, DVM, said “Caitlyn is in a lot of pain, her condition is critical, and her prognosis is guarded.” She also said that “A large part of her tongue may need to be removed surgically if the tissue dies from the lack of blood flow. She may be severely disfigured, or the large amount of dead tissue may cause life-threatening complications.”

The story of Caitlyn, the North Charleston dog who had her muzzle taped shut, is now worldwide.

We talked with one man at the Chinese Deli in the Chicora-Cherokee community. That is where the dog was discovered earlier this week. “You gotta think, what kind of cruel person is gonna take their time to that to a dog?”

Caitlyn was placed in a hyperbaric chamber Friday to give her more oxygen, to help her wounds heal faster. “She’s had three full meals. She’s been able to (take in food) and swallow it.”

She is scheduled for her first surgery either Monday or Tuesday of next week.

Treatment for Caitlyn will be paid for by Toby’s Fund, Charleston Animal Society’s medical fund that is only made possible by donations from the community.

“This is the most malicious case of animal abuse I have ever seen in my entire career,” said Charleston Animal Society Director of Anti-Cruelty & Outreach Aldwin Roman. He continued, “to leave this dog in pain, unable to eat or drink and to now leave her in the position where her life is at stake because she may lose her tongue is heartbreaking.”

North Charleston Animal Control is investigating the case and looking for whoever is responsible. Charleston Animal Society is offering a $1,000 reward for information leading to the arrest and conviction of those responsible, and Friday the Humane Society of the United States added another $5,000. If convicted of ill treatment of an animal, the guilty could face up to 5 years in prison and a $5,000 fine.